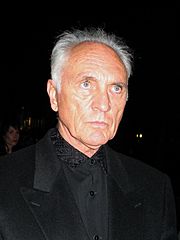 Terence Henry Stamp (born 22 July 1938) is a British movie, voice, television, and stage actor who has appeared in over 100 movies such as; The Adventures of Priscilla, Queen of the Desert, Superman II, Get Smart,The Haunted Mansion, Star Wars Episode I: The Phantom Menace, Valkyrie, Yes Man, and Wanted. Stamp has been awarded a Golden Globe Award, Silver Bear Award, and a Satellite Award. He has acted in over 100 films.

Stamp was born in Stepney, London. In the 1960s he and supermodel girlfriend Jean Shrimpton were one of the most photographed couples of the day. Another of his famous girlfriends was Julie Christie. Later, Stamp became a follower of Bhagwan Shree Rajneesh, and lived for a while at the latter's ashram (~estate) in Poona.

All content from Kiddle encyclopedia articles (including the article images and facts) can be freely used under Attribution-ShareAlike license, unless stated otherwise. Cite this article:
Terence Stamp Facts for Kids. Kiddle Encyclopedia.