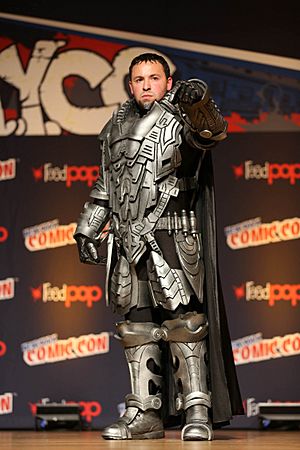 General Zod (full name Dru-Zod) is a fictional Superman character who appears in American comic books published by DC Comics. The character, who first appeared in Adventure Comics #283 (April 1961), was created by Robert Bernstein and initially designed by George Papp. He is a super-villain from Superman’s planet. He has the same powers and strength that he has. He was sent to Earth to kill Superman.

Total Film ranked Zod #32 on their "Top 50 Greatest Villains of All Time" list in 2007. Pop-culture website IGN.com ranked General Zod as #30 on their list of the "Top 100 Comic Book Villains", asserting that "Stamp is Zod.

All content from Kiddle encyclopedia articles (including the article images and facts) can be freely used under Attribution-ShareAlike license, unless stated otherwise. Cite this article:
General Zod Facts for Kids. Kiddle Encyclopedia.