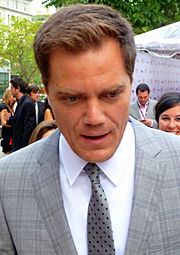 Shannon in at the 2011 Toronto International Film Festival, September 2011

Michael Corbett Shannon (born August 7, 1974 in Lexington, Kentucky) is an American actor. He is a two-time Academy Award for Best Supporting Actor nominee for his roles in Revolutionary Road and Nocturnal Animals. He was a regular on the HBO series Boardwalk Empire, playing Agent Nelson Van Alden. Shannon played General Zod in Zack Snyder's 2013 movie Man of Steel. He plays Colonel Richard Strickland in The Shape of Water.

Shannon was born in Lexington, Kentucky on August 7, 1974 to Donald S. Shannon and to Geraldine Hine. He was raised in Chicago, Illinois. His career began in 1993 in the movie Groundhog Day.

Shannon is in a relationship with actress Kate Arrington. They have two daughters.

Some movies he was in

All content from Kiddle encyclopedia articles (including the article images and facts) can be freely used under Attribution-ShareAlike license, unless stated otherwise. Cite this article:
Michael Shannon Facts for Kids. Kiddle Encyclopedia.