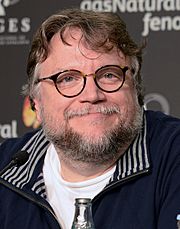 Guillermo del Toro (born October 9, 1964) is a Mexican movie director, screenwriter, author, and producer who is known for directing Pan's Labyrinth, Hellboy II: The Golden Army and The Shape of Water. He known for his fiction or fantasy movies. He is also known for his monster movies. He won a Golden Globe, BAFTA Award, Satellite Award and an Academy Award in 2018.

He is also close friends with fellow Mexican filmmakers Alfonso Cuarón and Alejandro G. Iñárritu, collectively known as "The Three Amigos of Cinema".

He was born on October 9, 1964 in Guadalajara, Jalisco, Mexico. He was married to Lorenza Newton from 1986 until they divorced in 2017 and they have two children. He lives in Agoura Hills, California. He has won a British Academy Film Award and a Saturn Award.

All content from Kiddle encyclopedia articles (including the article images and facts) can be freely used under Attribution-ShareAlike license, unless stated otherwise. Cite this article:
Guillermo del Toro Facts for Kids. Kiddle Encyclopedia.