In this Japanese name, the family name is Miyazaki. 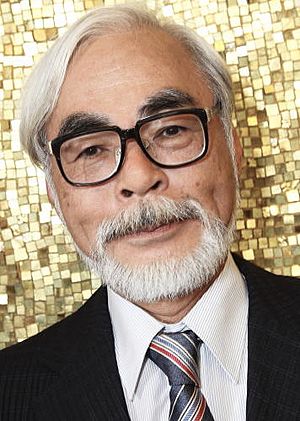 Hayao Miyazaki (宮崎 駿code: ja is deprecated , Miyazaki Hayao, born January 5, 1941) is a leader in the area of anime, or Japanese animation. His name is pronounced "Ha-ya-oh Me-ya-za-key". He worked with Isao Takahata.

His company is named Studio Ghibli. In 2001, he won the Academy Award for Best Animated Feature for Spirited Away. It was the first anime to win the award in that category.

During a press conference at Italy's Venice Film Festival, he announced that he was going to retire from the production of feature-length films.

Miyazaki announced his retirement on September 2, 2013.

Works directed by him

All content from Kiddle encyclopedia articles (including the article images and facts) can be freely used under Attribution-ShareAlike license, unless stated otherwise. Cite this article:
Hayao Miyazaki Facts for Kids. Kiddle Encyclopedia.