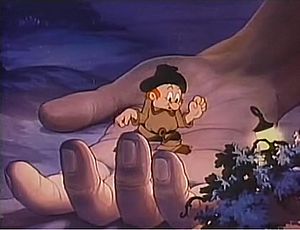 Gulliver in Lilliput, the land of the little people

Gulliver's Travels, is a 1726 fictional satire by Jonathan Swift. The novel follows main character Lemuel Gulliver and his journey to four countries.

The four countries are Lilliput, a land of little people, Brobdingnag, a land of big people, Laputa, a land of intelligent but useless people, and Houyhnhnm, a land of horses.

Swift wrote the novel for adults to show that some people and governments were wrong. The story was intended to make them change.

In 2010, a movie version was made starring Jack Black.

All content from Kiddle encyclopedia articles (including the article images and facts) can be freely used under Attribution-ShareAlike license, unless stated otherwise. Cite this article:
Gulliver's Travels Facts for Kids. Kiddle Encyclopedia.