Kids Encyclopedia Facts
For the book that the character originally appears in, see Pippi Longstocking (book). 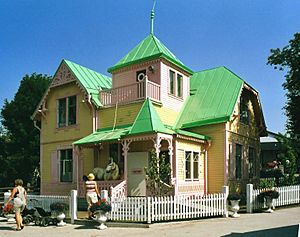 "Villa Villekulla", the house used for the movie and series. It is located on Gotland in the town of Vibble.

Pippi Longstocking (Swedish: Pippi Långstrump) is a fictional character who originally appeared in a series of children's books by Swedish author Astrid Lindgren. The character has since adapted into several movies and television series. Pippi means "quirky" in old Swedish slang. She was named by Lindgren's daughter Karin, who was nine years old at the time. She had asked for a story from her mother one day when she was home sick from school.

Pippi is an unusual and spirited nine-year-old girl. She has superhuman strength, and is easily able to lift her horse with one hand. She often mocks and tricks adults she encounters; she usually reserves her worst behaviour for the most condescending adults. Pippi only really gets angry when someone treats her horse badly. Like Peter Pan, Pippi does not want to grow up. She is the daughter of a pirate captain and has adventurous tales to tell. She has four best friends: her horse, a monkey, and the neighbour's children Tommy and Annika.

There were three original picture books that were translated into English:

There are many picture books and short books based on parts of chapters from the original three, including:

The first movie about Pippi Longstocking was filmed in 1949. The movie was based on three of the books, but several storylines were changed and characters were removed and added. Pippi's character was played by Viveca Serlachius. It was directed by Per Gunvall and released on October 20, 1950.

An American movie version from Columbia Pictures was released in 1988. It was called The New Adventures of Pippi Longstocking, although it actually just retold the original story. The movie was directed by British director Ken Annakin. It starring Tami Erin as Pippi with Eileen Brennan, Dennis Dugan, John Schuck and Dick Van Patten in supporting roles.

The episode stars (among others) child actor Gina Gillespie as Pippi Longstocking, Renie Riano as schoolteacher Miss Lindquist, and Tor Johnson as circus strongman Mighty Adolf. Pippi defeats bullies and burglars, and out-performs a circus strongman. The episode has been released to DVD.

A Swedish television series, Pippi Longstocking, was created in 1968. The stories were based on the books. The first episode was broadcast on Sveriges Radio TV in February 1969. It was a co-production between Sweden and West Germany. Several German actors had roles in the series. Inger Nilsson played Pippi.

Astrid Lindgren had been unhappy with the 1949 adaptation. She wrote the script herself for this version. The series was directed by Olle Hellbom who also directed several other Astrid Lindgren adaptations. This version is the most well-known version in Sweden and other European countries.

A television movie version, Peppi Dlinnyychulok, was released in 1982 by Mosfilm. It was produced by Margaret Mikalan, and starred Mikhail Boyarsky, Lev Durov and Tatiana Vasilieva. Pippi was played by Svetlana Stupak, and her singing voice was provided by Svetlana Stepchenko.

In 1985, Carrie Kei Heim played Pippi in the ABC Weekend Special called Pippi Longstocking. It was directed by Colin Chilvers. It was shown in two parts: on November 2 and November 9.

All content from Kiddle encyclopedia articles (including the article images and facts) can be freely used under Attribution-ShareAlike license, unless stated otherwise. Cite this article:
Pippi Longstocking Facts for Kids. Kiddle Encyclopedia.