Greta Thunberg (born 3 January 2003) is a Swedish activist. She is known for her work against climate change, a popular example of youth activism.

Thunberg is known for her youth and her straightforward speaking manner, both in public and to political leaders and assemblies, in which she criticises world leaders for their failure to take sufficient action to address the climate crisis.

Thunberg's activism started after convincing her parents to adopt several lifestyle choices to reduce their own carbon footprint. In August 2018, at age 15, she started spending her school days outside the Swedish parliament to call for stronger action on climate change by holding up a sign reading Skolstrejk för klimatet (School strike for climate). Soon, other students engaged in similar protests in their own communities. Together, they organised a school climate strike movement under the name Fridays for Future. After Thunberg addressed the 2018 United Nations Climate Change Conference, student strikes took place every week somewhere in the world. In 2019, there were multiple coordinated multi-city protests involving over a million students each. To avoid flying, Thunberg sailed to North America where she attended the 2019 UN Climate Action Summit. Her speech there, in which she exclaimed "how dare you", was widely taken up by the press and incorporated into music.

Her sudden rise to world fame has made her both a leader and a target for critics. Her influence on people around the world became known as the "Greta effect". She has received numerous honours and awards including: honorary Fellowship of the Royal Scottish Geographical Society; Time magazine's 100 most influential people and the youngest Time Person of the Year; inclusion in the Forbes list of The World's 100 Most Powerful Women (2019) and two consecutive nominations for the Nobel Peace Prize (2019 and 2020). 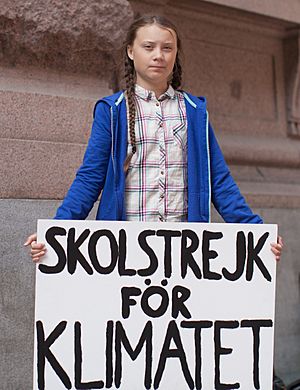 Thunberg in front of the Swedish parliament, holding a "Skolstrejk för klimatet" (School strike for the climate) sign, Stockholm, August 2018 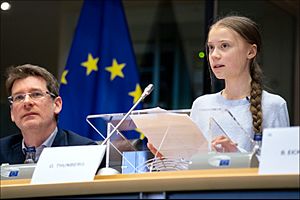 Thunberg speaks before the European Parliament’s Environment Committee in 2020

Greta Thunberg was born on 3 January 2003. She is the oldest daughter of Malena Ernman, an opera singer and her father is actor Svante Thunberg. Her grandfather is actor and director Olof Thunberg.

At a TEDx speech in November 2018, Thunberg stated that she first heard about climate change at the age of eight, but could not understand why so little was being done about it. At age 11, she had depression and stopped talking. Later she was diagnosed with Asperger syndrome, obsessive–compulsive disorder (OCD), and selective mutism. She added that selective mutism means that she was speaking only when she needed to and that "now is one of those moments". She further added that the "spectrum" was an advantage "as almost everything is black or white". She said: "I feel like I am dying inside if I don't protest". She hands out leaflets outside the Swedish parliament with the phrase "I am doing this because you adults are destroying my future."

Her father doesn't like that she misses school but says: "[We] respect that she wants to make a stand. She can either sit at home and be really unhappy, or protest, and be happy". To lower her family's carbon footprint, she insisted on becoming vegan and give up flying. She said she persuaded her parents to give up eating meat by making them feel guilty. "I kept telling them that they were stealing our future." Her mother gave up her international career as an opera singer. Despite invitations to speak at international events, Greta also avoids flying.

Thunberg says her teachers are divided in their views about her missing class to make her protest. She says: "As people they think what I am doing is good, but as teachers they say I should stop." A teacher who supports her said: "Greta is a troublemaker, she is not listening to adults. But we are heading full speed for a catastrophe, and in this situation the only reasonable thing is to be unreasonable."

In May 2019 Penguin, a British publishing house, published No One Is Too Small to Make a Difference, which is a collection of her speeches. Penguin plans to publish Scenes from the Heart, the Thunberg family's story, published in August 2018. All earnings from these books will be donated to charity. In the same month, artist Jody Thomas painted a mural of Thunberg on a wall in Bristol. It portrays the bottom half of her face as if under rising sea water.

All content from Kiddle encyclopedia articles (including the article images and facts) can be freely used under Attribution-ShareAlike license, unless stated otherwise. Cite this article:
Greta Thunberg Facts for Kids. Kiddle Encyclopedia.