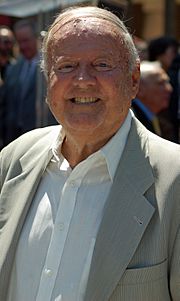 Richard Vincent "Dick" Van Patten (December 9, 1928 – June 23, 2015) was an American actor, businessman, and animal welfare advocate. He was best known for his role as Tom Bradford on the television sitcom Eight is Enough.

He began working as a child actor. He was successful on the New York stage, appearing in more than a dozen plays as a teenager. He later starred in many television roles including the long running CBS television series, I Remember Mama and Young Dr. Malone. Later he would star or co-star in many feature movies including Mel Brooks' Robin Hood: Men in Tights, Charlton Heston's Soylent Green and the Academy Award winning Charly.

Van Patten died at the age of 86 from diabetic complications in Santa Monica, California.

All content from Kiddle encyclopedia articles (including the article images and facts) can be freely used under Attribution-ShareAlike license, unless stated otherwise. Cite this article:
Dick Van Patten Facts for Kids. Kiddle Encyclopedia.