Kew Gardens is a neighborhood in the central area of the New York City borough of Queens. Kew Gardens is bounded to the north by the Union Turnpike and the Jackie Robinson Parkway (formerly the Interboro Parkway), to the east by the Van Wyck Expressway and 131st Street, to the south by Hillside Avenue, and to the west by Park Lane, Abingdon Road, and 118th Street. Forest Park and the neighborhood of Forest Hills are to the west, Flushing Meadows–Corona Park north, Richmond Hill south, Briarwood southeast, and Kew Gardens Hills east.

Kew Gardens was one of seven planned garden communities built in Queens from the late 19th century to 1950. Much of the area was acquired in 1868 by Englishman Albon P. Man, who developed the neighborhood of Hollis Hill to the south, chiefly along Jamaica Avenue, while leaving the hilly land to the north undeveloped.

Maple Grove Cemetery on Kew Gardens Road opened in 1875. A Long Island Rail Road station was built for mourners in October and trains stopped there from mid-November. The station was named Hopedale, after Hopedale Hall, a hotel located at what is now Queens Boulevard and Union Turnpike. In the 1890s, the executors of Man's estate laid out the Queens Bridge Golf Course on the hilly terrains south of the railroad. This remained in use until it was bisected in 1908 by the main line of the Long Island Rail Road, which had been moved 600 feet (180 m) to the south to eliminate a curve. The golf course was then abandoned and a new station was built in 1909 on Lefferts Boulevard. Man's heirs, Aldrick Man and Albon Man Jr., decided to lay out a new community and called it at first Kew and then Kew Gardens after the well-known botanical gardens in England. The architects of the development favored English and neo-Tudor styles, which still predominate in many sections of the neighborhood. 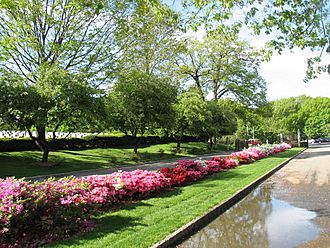 In 1910, the property was sold piecemeal by the estate and during the next few years streets were extended, land graded and water and sewer pipes installed. The first apartment building was the Kew Bolmer at 80–45 Kew Gardens Road, erected in 1915; a clubhouse followed in 1916 and a private school, Kew-Forest School, in 1918. In 1920, the Kew Gardens Inn at the railroad station opened for residential guests, who paid $40 a week for a room and a bath with meals. Elegant one-family houses were built in the 1920s, as were apartment buildings such as Colonial Hall (1921) and Kew Hall (1922) that numbered more than twenty by 1936.

In July 1933, the Grand Central Parkway opened from Kew Gardens to the edge of Nassau County; this road was extended in 1935 as the Interborough Parkway to Pennsylvania Avenue in East New York. Since the parkways used part of the roadbed of Union Turnpike, no houses were demolished. However, the greatest change was wrought by the opening of the Independent Subway System line along Queens Boulevard to Union Turnpike on December 31, 1936; four months later, the subway was extended to Jamaica, Queens. Residents could now reach Manhattan, Brooklyn, and the Bronx twenty-four hours a day for a five-cent fare, stimulating the construction of larger apartment buildings like Kent Manor and high-rise buildings along Queens Boulevard and the last vacant land disappeared.

Despite its historical significance, Kew Gardens lacks any landmark protection.

In addition to Maple Grove Cemetery, the Ralph Bunche House is listed on the National Register of Historic Places and is also a designated National Historic Landmark. 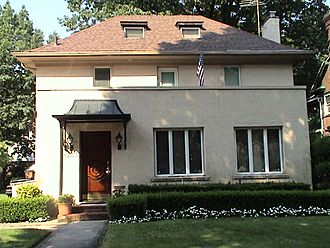 A typical house in Kew Gardens 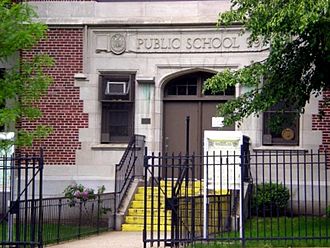 Kew Gardens remains a densely populated residential community, but Kew Gardens is increasingly becoming a upper class residential area, with a mix of one-family homes above the million-dollar range, complex apartments, co-ops and others converted and on the way or being converted as condominiums. A major five-star hotel is under development on 82nd Avenue, reflecting a modernization of the area. However, it is filled mainly with apartment buildings between four and ten stories high; while many are rentals, some are co-ops. Although there are no New York City Housing Authority complexes in Kew Gardens, Mitchell-Lama buildings provide stabilized rental prices for families or individuals who may need help paying rent. On 83rd Avenue there is a 32-story Mitchell-Lama building. Along the borders of Richmond Hill, Briarwood, and Jamaica, smaller attached houses exist. Many of these are two or three family homes. Expensive single family homes are located around the Forest Park area. Due to constant development, however, many owners are selling out their detached homes to developers who teardown and convert them into apartment housing. This has brought demographic change.

Surrounded by Forest Park, residents in Kew Gardens enjoy what many Manhattanites lack: greenery and quiet nights. The Park, which is very well preserved and is the third largest in Queens, has a private road where residents can jog or walk year round. There are some horse back riding paths and hiking paths actively used by residents. Frederick Law Olmsted conceived the design of the park. Some of the Queens courthouses are also located in Kew Gardens on the side of Queens Boulevard.

The neighborhood also has many airline personnel because of its proximity to the Q10 to John F. Kennedy International Airport, as well as to Delta Air Lines and other airlines' special shuttles that serve pilots and flight attendants staying in Kew Gardens.

Kew Gardens's commercial center is Lefferts Boulevard between Austin Street and Metropolitan Avenue. This street is the home to many favorite spots, including Kew Gardens Cinemas with a selection of independent international films, Dani's Pizzeria, Austin's Steak and the Austin Ale House, and Comic Den. The county's civic center, Queens Borough Hall, along with one of the county criminal courts, stand at the northern end of the neighborhood, on Queens Boulevard, in a complex extending from Union Turnpike to Hoover Avenue.

Schools of note located in Kew Gardens include Yeshiva Tifereth Moshe, Bais Yaakov of Queens and Yeshiva Shaar Hatorah. P.S. 99, the local public school, has special programs for gifted students such as the Gifted and Talented program, where children start to learn advanced material beginning in second grade.

The entirety of Community Board 9, which comprises Kew Gardens, Richmond Hill, and Woodhaven, had 148,465 inhabitants as of NYC Health's 2018 Community Health Profile, with an average life expectancy of 84.3 years. This is higher than the median life expectancy of 81.2 for all New York City neighborhoods. Most inhabitants are youth and middle-aged adults: 22% are between the ages of between 0–17, 30% between 25–44, and 27% between 45–64. The ratio of college-aged and elderly residents was lower, at 17% and 7% respectively. 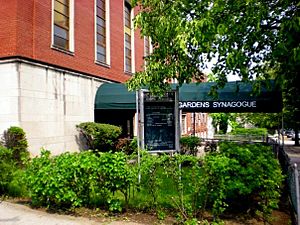 Kew Gardens Synagogue is one of several synagogues and other houses of worship in Kew Gardens, Queens.

The Hispanic and Asian populations in Kew Gardens have grown since the 2000 United States Census. At the time, the demographics were 66.2% White, 13.0% Asian, 7.0% African American, 0.3% Native American, and 7.4% of other races. Hispanic or Latino of any race were 20.0% of the population. Many of the residents are between the ages of 30 and 38, married, college graduates and renters.

Kew Gardens is ethnically diverse. A large community of Jewish refugees from Germany took shape in the area after the Second World War which is reflected still today by the number of active synagogues in the area. The neighborhood attracted many Chinese immigrants after 1965, about 2,500 Iranian Jews arrived after the Iranian Revolution of 1979, and immigrants from China, Pakistan, Iran, Afghanistan, Israel, the former Soviet Union, India, Bangladesh and Korea settled in Kew Gardens during the 1980s and 1990s. Currently, Kew Gardens has a growing population of Bukharian Jews from Uzbekistan, alongside a significant Orthodox Jewish community. Also many immigrants from Central America, and South America call Kew Gardens home, as well as immigrants from Japan.

The increase of the Korean population followed the renovation and rededication of the First Church of Kew Gardens, which offers Korean-language services. In recent years, young professionals and Manhattanites looking for greenery, park-like atmosphere and spacious apartments have moved to the area.

Major development in the neighborhood, such as the construction of new apartment complexes and multi-family homes, has resulted in great demographic change as well. Immigrants from Latin America, Guyana, South Asia and East Asia, and the Middle East (especially Israel), have moved into these new developments. Even the local cuisine reflects this diversity in Kew Gardens, with Russian, Italian, Indian, Pakistani, and Uzbek dining available to residents and visitors. Many religious groups such as Jews, Muslims, and Hindus, can shop at local markets and bazaars that cater to their religious-food needs. 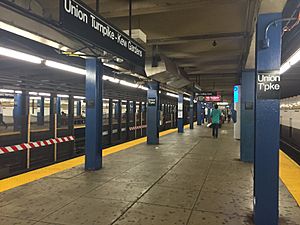 The neighborhood is accessible by car from Interstate 678 (Van Wyck Expressway), Grand Central Parkway, Jackie Robinson Parkway, Queens Boulevard, and Union Turnpike. These all intersect at the Kew Gardens Interchange. 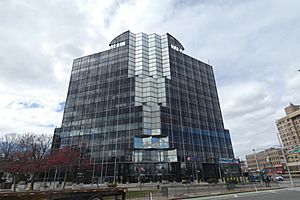 Kew Gardens has many locally owned businesses and restaurants especially on Lefferts Boulevard, Metropolitan Avenue, Austin Street, and Kew Gardens Road. The courthouse is very profitable, as is transportation to the area; however, neither profit the neighborhood directly, but instead serve as an incentive to move to the area. The cost of living in the neighborhood (as of 2015) is $62,900. Pilots and flight attendants who stay in Kew Gardens in between John F. Kennedy International Airport and LaGuardia Airport flights also affect the local economy.

Schools of note located in Kew Gardens include Yeshiva Tifereth Moshe, Bais Yaakov of Queens and Yeshiva Shaar Hatorah. The only public school in Kew Gardens is PS 99, which has special programs for gifted students such as the Gifted and Talented program.

Notable residents of Kew Gardens include: 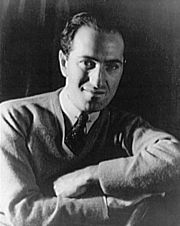 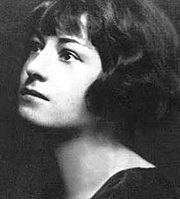 All content from Kiddle encyclopedia articles (including the article images and facts) can be freely used under Attribution-ShareAlike license, unless stated otherwise. Cite this article:
Kew Gardens, Queens Facts for Kids. Kiddle Encyclopedia.