Briarwood is a middle class neighborhood in the New York City borough of Queens. It is located northwest of Jamaica and roughly bounded by Queens Boulevard, Parsons Boulevard, Union Turnpike, and Hillside Avenue. The neighborhood is part of Queens Community Board 8. It lies in the northern half of the 11435 zip code.

The neighborhood is named for the Briarwood Land Company, headed by Herbert O'Brien, which built housing there beginning in 1905. However, the company quickly went bankrupt and the area was largely empty until the 1920s. The New York Life Insurance Company and the United Nations constructed housing in the 1940s; United States diplomat Ralph Bunche and feminist writer Betty Friedan have lived there.

The lack of major landmarks in the neighborhood coupled with its small size have caused Briarwood to remain relatively unknown. The local ZIP Code 11435 is actually designated as Jamaica. Parkway Village, a garden apartment complex initially built for United Nations employees is also in Briarwood and, in years past, lent the area a very international flavor with families from all over the world living there and attending the local public schools. 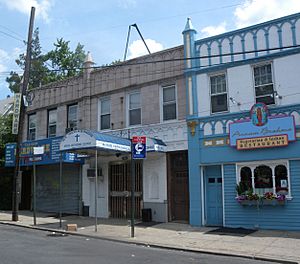 Briarwood is a very diverse community, according to 2010 census data that group Briarwood with neighboring Jamaica Hills, Asian-Americans (36.1%),White (21.5%), Hispanics (24.7%),African Americans (11.5%). This is a marked change from the post-war period (1950s-80s) when the neighborhood was almost exclusively white, with a large and active Jewish community. Economic activity is mostly confined to small restaurants, delis, markets, and other small businesses.

The neighborhood is known to be very inexpensive and provide affordable housing to middle-class families.

The neighborhood is served by the IND Queens Boulevard Line of the New York City Subway at the Briarwood station (E, ​F <F> trains). In that subway station, there were many paintings done by the students of Archbishop Molloy High School, M.S. 217Q, and P.S.117Q during the mid-1980s. They are titled, "Beautifying Briarwood". The paintings were removed during a renovation of the station in 2014. 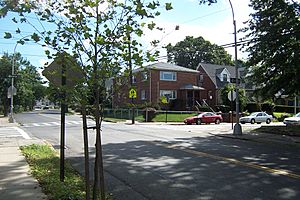 A residential intersection in Briarwood, 85th Avenue and 150th Street

Notable residents of Briarwood have included:

All content from Kiddle encyclopedia articles (including the article images and facts) can be freely used under Attribution-ShareAlike license, unless stated otherwise. Cite this article:
Briarwood, Queens Facts for Kids. Kiddle Encyclopedia.