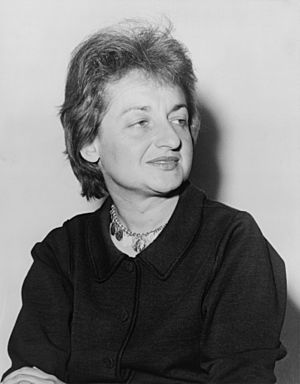 Betty Friedan (February 4, 1921 - February 4, 2006) was an American writer, activist and feminist. She wrote the book The Feminine Mystique in 1963. She argued in the book that there was more to life for women than the achievements of their husbands and children. In an interview for Life magazine in 1963 she said "Women of the world unite! You have nothing to lose but your vacuum cleaner!" She helped set up the National Organization for Women (NOW) in 1966 and was its first president. In 1981 The Second Stage was published. In the book Friedan said that the women's movement had reached its second stage.

All content from Kiddle encyclopedia articles (including the article images and facts) can be freely used under Attribution-ShareAlike license, unless stated otherwise. Cite this article:
Betty Friedan Facts for Kids. Kiddle Encyclopedia.