Any person whether at home full time or working outside the home who maintains the upkeep of his or her residence, cares for their family, perform daily chores, to create a peaceful, cozy and warm homey environment. Both male and female can be tagged to the term, alike to "housewife" and "househusband".

Because it has been the traditional job of a woman to be a homemaker, a woman who spends most of her time caring for the family home has been called a "housewife". Many women still use this word on government forms, because they see the value in homemaking.

For many thousands of years, men have been thought of by society as the main "breadwinners" in families. This means that it has been the job of men to do work in which animals were hunted for food by one or more men, or the men grew food crops or earned money to pay for food, while the women have cared for children, prepared food for eating, cleaned the home, and made and cared for clothes.

In societies where people are hunters and gatherers, for example the traditional society of the Australian aboriginal people, it is the men who do the hunting of animals for meat, and the women who do the gathering of other types of food such as grain, fruit and vegetables. One of the reasons is that a married woman usually had children and babies for a large part of her life. It is much easier to gather fruit with a baby on your hip or back than to hunt a fast-moving animal. So the men were able to raise up sons and daughters and the life of the community could continue into another generation. Even in a society where homes were very simple and people did not own very many things, men and women did different jobs. In the extreme conditions of the Arctic North the hunters must know how to hunt in extreme cold (among ice and snow); the women must maintain home life in huts made of ice ("igloos") and clothing needs to be made out of animal skin and insulated with moss and other plants. Babies live very close to their mothers so that they can be kept warm.

In rural societies, where the main work is farming women have also taken care of gardens and animals around the house, brewed weak alcoholic drinks (such as ale and mead) and helped men with heavy work whenever a job needed doing in a hurry, usually because of the season.

Examples of the heavy work that a traditional "housewife" (homemaker) in a rural society would do are:

An urban society is when most people live in towns and cities. In urban societies, since ancient times, most men did work that earned money. They worked in workshops, trading, banks and other businesses as well as in churches, schools and the town council. It was seen as the job of a woman to be a "housewife" (homemaker).

Every society always has some women who never marry. They might stay at home and do housework for other family members, or they might work outside the house like a man. In many urban societies, there have been few jobs that a woman was allowed to do. In modern society there are still strong traditions about the jobs that women should do.

In the 19th century (1801-1900) more and more women began to stop being homemakers and began to do jobs that men usually did. At this time many big factories were set up, first in England then in some other European countries and the United States as well. Many thousands of young women went to work in factories.

Other women, like Florence Nightingale, stopped being housewives and did dirty dangerous jobs, even though they were not poor and did not need to work. In most families where there was a husband and wife, everybody thought it was the job of the husband to earn money and the job of the woman to be a "housewife" (homemaker). Women were often very proud to be a good homemaker and have their house and children spotlessly clean, their husband's shirts neatly pressed, and tasty meals to eat every night.

In the first half of the 20th century (1901-1950) there were two big wars (World War I and World War II) that were fought by men from many countries. While the men were at war, their wives went to work to keep the countries running. Women, who were also homemakers, worked in factories, businesses and farms.

By the 1960s in western countries there was the idea that it was all right for a woman to work and be a "career girl" until the woman got married, when she should stop work and be a "housewife" (homemaker).

At this time, when more and more women had good educations and were able to earn a lot of money, in some families (usually if there were young children to care for) the husband would be the person that was the homemaker. (See above:The term "homemaker)

What does a homemaker do? 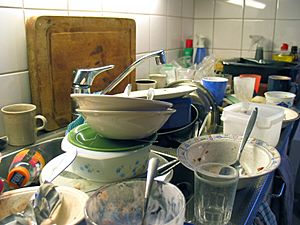 Dishes to be washed 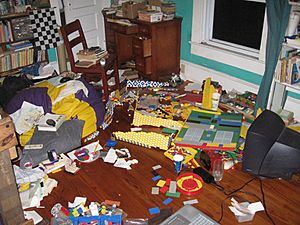 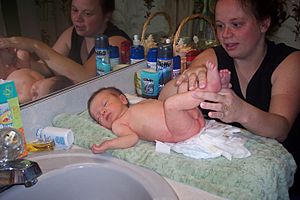 Baby to be bathed 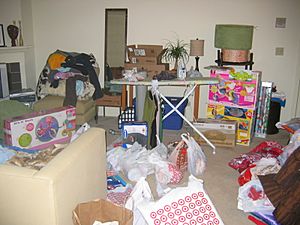 Christmas to be prepared for all the family

The job of a homemaker is to take care of a family and the place where the family lives. The usual things that a homemaker does are:

All content from Kiddle encyclopedia articles (including the article images and facts) can be freely used under Attribution-ShareAlike license, unless stated otherwise. Cite this article:
Homemaker Facts for Kids. Kiddle Encyclopedia.