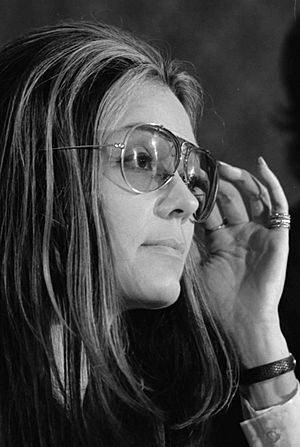 Gloria Marie Steinem (born March 25, 1934) is an American radical feminist and writer. She founded Ms. magazine, and also wrote for several other magazines. Steinem is Jewish and is from Toledo, Ohio.

Steinem started the Women's Media Centre with Jane Fonda and Robin Morgan in 2005.

In 2013 she was given the Presidential Medal of Freedom by Barack Obama.

All content from Kiddle encyclopedia articles (including the article images and facts) can be freely used under Attribution-ShareAlike license, unless stated otherwise. Cite this article:
Gloria Steinem Facts for Kids. Kiddle Encyclopedia.