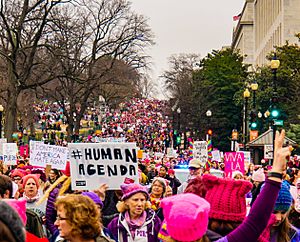 The 2017 Women's March was a global demonstration on 21-22 January 2017. It was in response to the inauguration of Donald Trump, the 45th president of the United States of America. The Women's March on Washington was said to have seen an attedance of over 470,000 people in Washington alone, which was 3 times more than president Trumps inauguration. This demonstration spanned 7 continents, including Antarctica.

All content from Kiddle encyclopedia articles (including the article images and facts) can be freely used under Attribution-ShareAlike license, unless stated otherwise. Cite this article:
2017 Women's March Facts for Kids. Kiddle Encyclopedia.