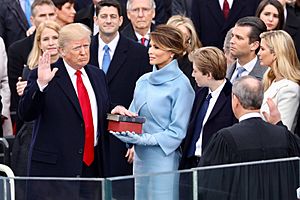 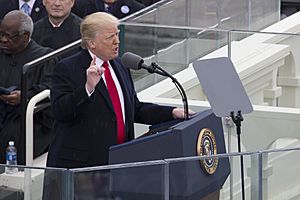 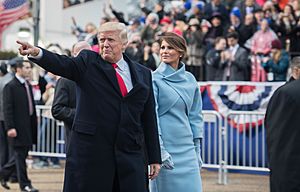 Benedictions were given by several clerics (among them a rabbi and reverend Franklin Graham, son of the retired reverend Billy Graham, who for decades gave benedictions at the inauguration of US presidents).

The main theme in the inauguration speech of President Trump was his focus on the interests of the United States ("America first!", "Make America Great Again").

Spectators were far fewer than at the inaugurations of his predecessor Barack Obama, although this was contested by President Trump and his spokesman. Most voters in Washington D.C. had voted for Hillary Clinton, Trump's main opponent in the United States presidential election, 2016.

Presidents Jimmy Carter, Bill Clinton, George W. Bush, and Barack Obama, along with their respective wives, the First Ladies (including Hillary Clinton), had all confirmed their attendance at Trump's inauguration, and were all present. George H. W. Bush, age 92, did not attend the inauguration due to health reasons.

Many groups applied for demonstration permits for Donald J. Trump's inauguration, including Bikers for Trump, and the Women's March on Washington, scheduled for the day after inauguration day. Most of the demonstrators were against the new president, and a few were rioters.

All content from Kiddle encyclopedia articles (including the article images and facts) can be freely used under Attribution-ShareAlike license, unless stated otherwise. Cite this article:
Inauguration of Donald Trump Facts for Kids. Kiddle Encyclopedia.