John Sidney McCain III (August 29, 1936 – August 25, 2018) was an American politician serving as the senior United States Senator from Arizona, a seat to which he was first elected in 1986. He was the Republican nominee for President of the United States in the 2008 election, which he lost to Barack Obama.

McCain graduated from the United States Naval Academy in 1958 and followed his father and grandfather—both four-star admirals—into the U.S. Navy. He became a naval aviator and flew ground-attack aircraft from aircraft carriers. During the Vietnam War, he was almost killed in the 1967 USS Forrestal fire.

While McCain was on a bombing mission over Hanoi in October 1967, he was shot down, seriously injured, and captured by the North Vietnamese. He was a prisoner of war until 1973. McCain experienced episodes of torture. The wounds that he sustained during war have left him with lifelong physical disabilities. He retired from the Navy as a captain in 1981 and moved to Arizona, where he entered politics.

In 1982, McCain was elected to the United States House of Representatives, where he served two terms. He entered the U.S. Senate in 1987 and easily won reelection five times, most recently in 2016. 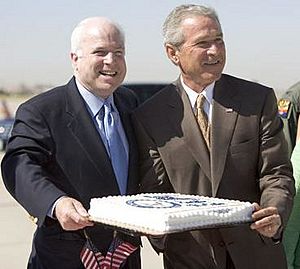 McCain entered the race for the Republican nomination for President in 2000, but to Governor George W. Bush of Texas. He secured the nomination in 2008, but was defeated by Democratic nominee Barack Obama in the general election.

He subsequently adopted more orthodox conservative stances and attitudes and largely opposed actions of the Obama administration, especially in regard to foreign policy matters. By 2013, however, he had become a key figure in the Senate. In 2015, McCain became Chairman of the Senate Armed Services Committee.

John McCain was born at Coco Solo Naval Air Station in the Panama Canal Zone, to naval officer John S. McCain Jr. (1911–1981) and Roberta (Wright) McCain (b. 1912). He has a younger brother named Joe and an elder sister named Sandy. At that time, the Panama Canal was under U.S. control.

Altogether, he attended about 20 schools. In 1951, the family settled in Northern Virginia, and McCain attended Episcopal High School, a private preparatory boarding school in Alexandria. He excelled at wrestling and graduated in 1954.

Following in the footsteps of his father and grandfather, McCain entered the United States Naval Academy at Annapolis. He also became a lightweight boxer. McCain did well in academic subjects that interested him, such as literature and history, but studied only enough to pass subjects that gave him difficulty, such as mathematics. He came into conflict with higher-ranking personnel and did not always obey the rules, which contributed to a low class rank (894 of 899), despite a high IQ. McCain graduated in 1958. 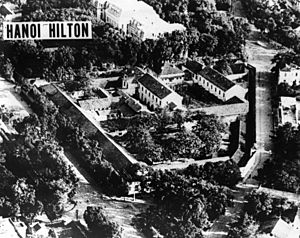 The Hoa Lo Prison, dubbed the Hanoi Hilton by the American POWs held there during the Vietnam War 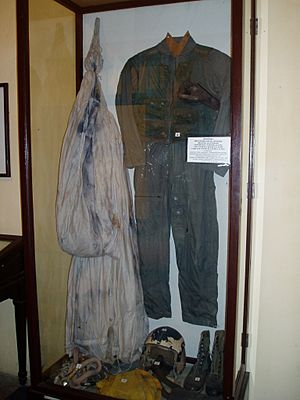 McCain's capture and subsequent imprisonment occurred on October 26, 1967. He was flying his 23rd bombing mission over North Vietnam when his A-4E Skyhawk was shot down by a missile over Hanoi. McCain fractured both arms and a leg when he ejected from the aircraft, and nearly drowned after he parachuted into Trúc Bạch Lake. Some North Vietnamese pulled him ashore, then others crushed his shoulder with a rifle butt and bayoneted him. McCain was then transported to Hanoi's main Hỏa Lò Prison, nicknamed the "Hanoi Hilton".

Although McCain was seriously wounded and injured, his captors refused to treat him. They beat and interrogated him to get information, and he was given medical care only when the North Vietnamese discovered that his father was a high-ranking admiral. His status as a prisoner of war (POW) made the front pages of major newspapers.

McCain spent six weeks in the hospital, where he received marginal care. He had lost 50 pounds (23 kg), was in a chest cast, and his gray hair had turned as white as snow. McCain was sent to a different camp on the outskirts of Hanoi. In December 1967, McCain was placed in a cell with two other Americans who did not expect him to live more than a week. In March 1968, McCain was placed into solitary confinement, where he would remain for two years.

In mid-1968, his father John S. McCain Jr. was named commander of all U.S. forces in the Vietnam theater, and the North Vietnamese offered McCain early release because they wanted to appear merciful for propaganda purposes, and also to show other POWs that elite prisoners were willing to be treated preferentially. McCain refused repatriation unless every man taken in before him was also released. Such early release was prohibited by the POWs' interpretation of the military Code of Conduct which states in Article III: "I will accept neither parole nor special favors from the enemy". To prevent the enemy from using prisoners for propaganda, officers were to agree to be released in the order in which they were captured.

Beginning in August 1968, McCain was subjected to a program of severe torture. Eventually, McCain made an anti-U.S. propaganda "confession". He has always felt that his statement was dishonorable, but as he later wrote, "I had learned what we all learned over there: every man has his breaking point. I had reached mine." Many U.S. POWs were tortured and maltreated in order to extract "confessions" and propaganda statements; virtually all of them eventually yielded something to their captors. McCain received two to three beatings weekly because of his continued refusal to sign additional statements.

McCain was a prisoner of war in North Vietnam for five and a half years until his release on March 14, 1973. His wartime injuries left him permanently incapable of raising his arms above his head. Since his release from the Hanoi Hilton, McCain has returned to the site with his wife Cindy and family on a few occasions to come to grips with what happened to him there during his capture.

McCain underwent treatment for his injuries that included months of grueling physical therapy. He attended the National War College at Fort McNair in Washington, D.C. during 1973–1974. McCain was rehabilitated by late 1974 and his flight status was reinstated. In 1976, he became commanding officer of a training squadron that was stationed in Florida.

McCain served as the Navy's liaison to the U.S. Senate beginning in 1977.

McCain retired from the Navy on April 1, 1981, as a captain. He was designated as disabled and awarded a disability pension. Upon leaving the military, he moved to Arizona. His numerous military decorations and awards include the Silver Star Medal, two Legions of Merit, Distinguished Flying Cross, three Bronze Star Medals, two Purple Heart Medals, two Navy and Marine Corps Commendation Medals, and Prisoner of War Medal. 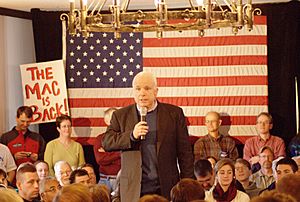 In July 2017, he was diagnosed with brain cancer; since the diagnosis he has taken a reduced role in the Senate, casting his last vote that December. President Trump made a public statement wishing Senator McCain well, as did many others, including former President Obama. He is in good spirits as he continues to recover at home with his family in Arizona. He is grateful to the doctors and staff at Mayo Clinic for their outstanding care, and is confident that any future treatment will be effective." On July 24, McCain announced via Twitter that he would return to the United States Senate the following day.

On July 25, 2017, less than two weeks after brain surgery, McCain returned to the Senate, and cast a deciding vote allowing the Senate to begin consideration of bills to replace Obamacare. Along with that vote, he delivered a speech criticizing the party-line voting process used by the Republicans, as well as by the Democrats in passing Obamacare to begin with, and McCain also urged a "return to regular order" utilizing the usual committee hearings and deliberations. On July 28, he cast the decisive vote against the Republicans' final proposal that month, the so-called "skinny repeal" option, which failed 49–51.

McCain has not voted in the Senate since December 2017, instead opting to remain in Arizona to undergo cancer treatment. On April 15, 2018, he underwent surgery for an infection relating to diverticulitis and the following day was reported to be in stable condition.

On August 24, 2018, McCain's family announced that he was stopping treatment for his brain cancer. McCain died the next day.

All content from Kiddle encyclopedia articles (including the article images and facts) can be freely used under Attribution-ShareAlike license, unless stated otherwise. Cite this article:
John McCain Facts for Kids. Kiddle Encyclopedia.