Kunar is one of the 34 provinces of Afghanistan, located in the northeastern part of the country. Its capital is Asadabad. It has a population of about 428,800.

It is one of the four "N2KL" provinces. N2KL is the designation used by the US and Coalition Forces in Afghanistan for the rugged and very violent region along the Durand Line border opposite Pakistan's Federally Administered Tribal Areas and Khyber Pakhtunkhwa.

Kunar is the center of the N2KL region. Kunar is the birthplace of Sayyed Jamaluddin Afghani, an influential Muslim scholar and philosopher.

The opening scenes of the 2008 film Iron Man take place in Kunar Province. 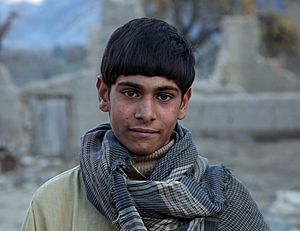 A boy from the Kunar Province

The river flows south and southwest from its source in the Pamir area and is part of the Indus River via the Kabul River.

The mountains, narrow valleys with steep walls, and rivers present intimidating natural obstacles and have historically restricted all movement through the province. Even in the early 21st century, movement on foot, with pack animals, or with motorized vehicles is extremely limited and challenging due to the significant geographic restrictions.

All content from Kiddle encyclopedia articles (including the article images and facts) can be freely used under Attribution-ShareAlike license, unless stated otherwise. Cite this article:
Kunar Province Facts for Kids. Kiddle Encyclopedia.