Peoria ( PEE-or-EE-uh) is a city in and the county seat of Peoria County, Illinois, United States, and the largest city on the Illinois River. Established in 1691 by the French explorer Henri de Tonti, Peoria is the oldest European settlement in Illinois, and is named after the Peoria tribe. As of the 2010 census, the city was the seventh-most populated in Illinois (and the third largest outside of the Chicago metropolitan area), with a population of 115,007. The Peoria Metropolitan Statistical Area had a population of 373,590 in 2011. Peoria had a population of 118,943 in 2010, when far northern Peoria was also included. Peoria is, until later in 2017 when a move of some executive and support staff (in the end, about 300) to Chicago will begin, the global and national headquarters for Caterpillar Inc., one of the 30 companies composing the Dow Jones Industrial Average, and listed on the Fortune 100. Around 12,000 jobs will still remain in the Peoria area.

Peoria is one of the oldest settlements in Illinois, as explorers first ventured up the Illinois River from the Mississippi. The lands that eventually would become Peoria were first settled in 1680, when French explorers René-Robert Cavelier, Sieur de La Salle and Henri de Tonti constructed Fort Crevecoeur. This fort would later burn to the ground, and in 1813 Fort Clark, Illinois was built. When the County of Peoria was organized in 1825, Fort Clark was officially named Peoria.

Peoria was named after the Peoria tribe, a member of the Illinois Confederation. The name "Peoria" derives from their autonym or name for themselves in the Illinois language, peewaareewa (modern pronunciation peewaalia). Originally it meant, "Comes carrying a pack on his back." No speakers of the Peoria language survive. A 21st-century proposal suggests a derivation from a Proto-Algonquian word meaning "to dream with the help of a manitou."

Peoria, Arizona, a suburb of Phoenix, was named after Peoria, Illinois because the two men who founded it in 1890 − Joseph B. Greenhut and Deloss S. Brown − wished to name it after their hometown.

Peoria is bounded on the east by the Illinois River except for the enclave of Peoria Heights, which also borders the river. Four bridges run directly between the city and neighboring East Peoria. On the south end of Peoria's western border are Bartonville and the newly established city of West Peoria. Local municipal plans indicate that the city intends to continue its expansion northwest, into an area unofficially considered part of Dunlap, Illinois.

Panorama of downtown Peoria, viewed from across the Illinois River in East Peoria. In the middle are the Twin Towers, the Former Caterpillar World Headquarters Building, and the Associated Bank Building
Main page: List of tallest buildings in Peoria

Peoria's downtown area includes corporate, governmental, convention, educational, and medical facilities. It is also home to the Peoria Civic Center, Theatres, and Dozer Park, as well as an arts, dining, and entertainment area near the riverfront. The downtown area now also includes high-rise residential developments such as condominia, apartments, and riverfront lofts. Some of these were office buildings and warehouses converted to residential use.

The city of Peoria is home to a United States courthouse, the Peoria Civic Center (which includes Carver Arena), and the world headquarters for Caterpillar Inc. was based in Peoria for over 110 years until annoucing their move to Chicago in late 2017. Medicine has become a major part of Peoria's economy. In addition to three major hospitals, the USDA's National Center for Agricultural Utilization Research, formerly called the USDA Northern Regional Research Lab, is located in Peoria. This is the lab where mass production of penicillin was developed.

Grandview Drive, which Theodore Roosevelt purportedly called the "world's most beautiful drive" during a 1910 visit, runs through Peoria and Peoria Heights. In addition to Grandview Drive, the Peoria Park District boasts 9,000 acres (36 km2) of parks, including the Peoria Zoo and five public golf courses. There are also several private and semi-private golf courses. The Peoria Park District, the first and still largest park district in Illinois, was the 2001 Winner of the National Gold Medal Award for Excellence in Parks and Recreation for Class II Parks.

Museums in Peoria include the Pettengill-Morron House, the John C Flanagan House of the Peoria Historical Society, and the Wheels o' Time Museum. A new Museum Square, opened on October 12, 2012, houses the Peoria Riverfront Museum, a planetarium, and the Caterpillar World Visitors Center.

The Peoria Art Guild hosts the Annual Art Fair, which is continually rated as one of the 100 top art fairs in the nation.

Three cultural institutions are located in Glen Oak Park. The Peoria Zoo, formerly Glen Oak Zoo, was expanded and refurbished in recent years. Finished in 2009, the new zoo improvements more than triple the size of the zoo and feature a major African safari exhibit. Luthy Garden, established in 1951, encompasses five acres and offers over a dozen theme gardens and a Conservatory. The Peoria PlayHouse Children's Museum opened in June 2015 in the Glen Oak Pavilion.

The Peoria Santa Claus Parade, which started in 1888, is the oldest running holiday parade in the United States.

Peoria is the home to many great songwriters, musicians, and lyricists, prominent among them Richard A. Whiting. Whiting was born in Peoria in 1891, and inducted into the Songwriters' Hall of Fame in 1970. His first hit, "It's Tulip Time in Holland" sold more than one million copies in just a few months in 1915 though, because he sold it outright, he never received any royalties. In 1918, his song, "Til We Meet Again," sold five million copies. Whiting, having graduated from a California military academy, sung in vaudeville shows, and worked in Detroit and New York, went to Hollywood in 1929. In nine years of writing music for films, he produced more than 50 hit songs, including "On the Good Ship Lollipop", made famous by Shirley Temple in 1934. Other music includes "Hooray for Hollywood", "Ain't We Got Fun?," and "Beyond the Blue Horizon". He scored several Broadway shows and worked with some of the most successful lyricists of his day, including Raymond B. Egan, Gus Kahn, and Johnny Mercer. Al Jolson, Maurice Chevalier, Jeanette MacDonald, Bing Crosby, and Ethel Merman were among the stars who sang his melodies. Richard Whiting died of a heart attack in 1938, when he was only 46.

Peoria Symphony Orchestra is the 10th oldest in the nation. Peoria is also home to the Peoria Municipal Band, the Peoria Area Civic Chorale, the Central Illinois Youth Symphony, and the Peoria Ballet. Several community and professional theaters have their home in and around Peoria, including the Peoria Players, which is the fourth-oldest community theater in the nation and the oldest in Illinois. Corn Stock Theatre is another community theater company in Peoria, and is the only outdoor theater company in Central Illinois.

Peoria has hosted the Heart of Illinois Fair every year since 1949. The fair features livestock competitions, rides, concessions, motor contests and concerts.

NOAA Weather Radio station WXJ71 transmits from East Peoria and is licensed to NOAA's National Weather Service Central Illinois Weather Forecast Office at Lincoln, broadcasting on a frequency of 162.475 mHz (channel 4 on most newer weather radios, and most SAME weather radios). The station activates the SAME tone alarm feature and a 1050 Hz tone activating older radios (except for AMBER Alerts, using the SAME feature only) for hazardous weather and non-weather warnings and emergencies, along with selected weather watches, for the Illinois counties of Fulton, Knox, Marshall, Mason, McLean, Peoria, Putnam, Stark, Tazewell, and Woodford. Weather permitting, a tone alarm test of both the SAME and 1050 Hz tone features are conducted every Wednesday between 11 AM and Noon.

The Peoria Civic Center includes an arena, convention center, and theater, and was completed in the early 1980s, was designed by the famed late architect Philip Johnson. The three structures are connected via an enclosed glass panel arcade for all-weather protection and aesthetics. As of 2007, it has completed a $55 million renovation and expansion based on demand for larger conventions and entertainment venues.

Renovations to the older Pere Marquette have been completed by hotel developer Gary Matthews. It is now a full-service Marriott Hotel with a skyway linking to the Peoria Civic Center. A new 12-story Courtyard has been built adjacent to this hotel, completing a hotel campus for larger conventions.

Renaissance Park was originally designated as a research park, originally established in May 2003 as the Peoria Medical and Technology District. It consisted of nine residential neighborhoods, Bradley University, the medical district, Caterpillar world headquarters, and the National Center for Agricultural Utilization Research. The Peoria NEXT Innovation Center opened in August 2007 and provides both dry and wet labs, as well as conference and office space for emerging start-up companies. Over $2 billion in research is conducted in Peoria annually. While the Renaissance Park research park project never came to full fruition, many of the original ideas from the original Renaissance Park concept still continue on a smaller level via The Renaissance Park Community Association.

The Block is a $100+ million project that contains the Peoria Riverfront Museum and The Caterpillar Experience, a museum and visitor's center showcasing Caterpillar past, present, and future. It is located in downtown Peoria along the Illinois River at the site formerly known as the Sears Block. The Block opened in October 2012.

Special censuses were conducted in 2004 and 2007 that noted a total increase of 8,455 in the city's population since the 2000 census, mainly in the northwest corridor making the current population 121,391. The metropolitan area has a population of 370,000, which includes Peoria, Tazewell, Woodford, Stark and Marshall counties. Suburbs and towns in this area include Bartonville, Bellevue, Creve Coeur, Dunlap, East Peoria, Germantown Hills, Groveland, Marquette Heights, Metamora, Morton, North Pekin, Norwood, Pekin, Peoria Heights, Pottstown, Rome, Tremont, Washington, and West Peoria. 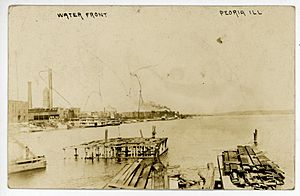 The theme of Peoria as the archetypal example of middle American culture runs throughout American culture, appearing in movies and books, on television and radio, and in countless advertisements as either a filler place name, the representative of mainstream taste, hence the phrase "Will it play in Peoria?".

Peoria is usually used in a complimentary—and positive—fashion in advertising; in contrast, most fictional allusions are an obvious affront and literary usage often implies that "Peoria" is equivalent to "provincial".

All content from Kiddle encyclopedia articles (including the article images and facts) can be freely used under Attribution-ShareAlike license, unless stated otherwise. Cite this article:
Peoria, Illinois Facts for Kids. Kiddle Encyclopedia.