Shirley Anita St. Hill Chisholm (November 30, 1924 – January 1, 2005) was an American politician, educator, and writer. She was a member of the Democratic Party.

Chisholm was born in Brooklyn, New York City. She studied at Brooklyn College.

She was a member of the United States House of Representatives for New York's 2nd district. She served as a representative from 1969 to 1983.

Shirley Anita St. Hill was born in Brooklyn, New York, of immigrant parents. Her father, Charles Christopher St. Hill, was born in British Guiana and arrived in the United States via Antilla, Cuba, on April 10, 1923, aboard the S.S. Munamar in New York City. Her mother, Ruby Seale, was born in Christ Church, Barbados, and arrived in New York City aboard the S.S. Pocone on March 8, 1921. At age three, Chisholm was sent to Barbados to live with her maternal grandmother, Emaline Seale, in Christ Church; where she attended the Vauxhall Primary School. She did not return until roughly seven years later when she arrived in New York City on May 19, 1934, aboard the S.S. Narissa. In her 1970 autobiography Unbought and Unbossed, she wrote: "Years later I would know what an important gift my parents had given me by seeing to it that I had my early education in the strict, traditional, British-style schools of Barbados. If I speak and write easily now, that early education is the main reason." Chisholm is an alumna of Girls' High School, she earned her BA from Brooklyn College in 1946 and later earned her MA from Columbia University in elementary education in 1952. She was a member of the Delta Sigma Theta Sorority.

From 1953 to 1959, she was director of the Hamilton-Madison Child Care Center. From 1959 to 1964, she was an educational consultant for the Division of Day Care. 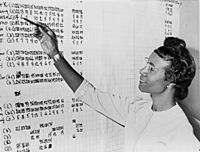 As a fresh black woman, Chisholm was assigned to the House Agricultural Committee. Given her urban district, she felt the placement was irrelevant to her constituents and shocked many by asking for reassignment. She was then placed on the Veterans' Affairs Committee. Soon after, she voted for Hale Boggs as House Majority Leader over John Conyers. As a reward for her support, Boggs assigned her to the much-prized Education and Labor Committee, which was her preferred committee. She was the third highest-ranking member of this committee when she retired from Congress.

All those Chisholm hired for her office were women, half of them black. Chisholm said that during her New York legislative career, she had faced much more discrimination because she was a woman than because she was black. 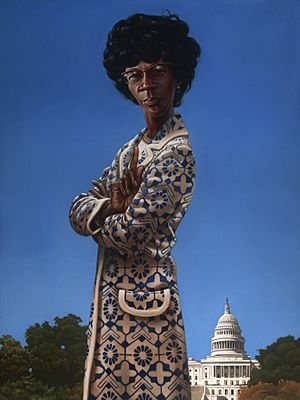 Portrait of Chisholm by Kadir Nelson in the Collection of the U.S. House of Representatives

In the 1972 U.S. presidential election, she made a bid for the Democratic Party's presidential nomination. She survived three assassination attempts during the campaign. She campaigned in 12 states and won the Louisiana, Mississippi, and New Jersey primaries earning 152 delegates. However, she lost the hotly contested primaries to George McGovern at the convention in Miami Beach, Florida. At the 1972 Democratic National Convention, as a symbolic gesture, McGovern opponent Hubert H. Humphrey released his black delegates to Chisholm, giving her a total of 152 first-ballot votes for the nomination. Chisholm's base of support was ethnically diverse and included the National Organization for Women.

Chisholm said she ran for the office "in spite of hopeless odds... to demonstrate the sheer will and refusal to accept the status quo." Among the volunteers who were inspired by her campaign was Barbara Lee, who continued to be politically active and was elected as a congresswoman 25 years later. Betty Friedan and Gloria Steinem attempted to run as Chisholm delegates in New York.

Chisholm created controversy when she visited rival and ideological opposite George Wallace in the hospital soon after his shooting in May 1972, during the 1972 presidential primary campaign. Several years later, when Chisholm worked on a bill to give domestic workers the right to a minimum wage, Wallace helped gain votes of enough Southern congressmen to push the legislation through the House.

Throughout her tenure in Congress, Chisholm worked to improve opportunities for inner-city residents. She was a vocal opponent of the draft and supported spending increases for education, health care and other social services, and reductions in military spending.

In 1970, she authored a child care bill. The bill passed the House and the Senate, but was vetoed by President Richard Nixon, who called it "the Sovietization of American children".

In the area of national security and foreign policy, Chisholm worked for the revocation of Internal Security Act of 1950. She opposed the American involvement in the Vietnam War and the expansion of weapon developments. During the Jimmy Carter administration, she called for better treatment of Haitian refugees. 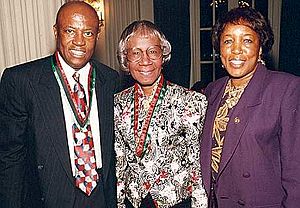 Chisholm was married to Conrad Chisholm, a Jamaican private investigator from 1949 to 1977. In 1978, she married Arthur Hardwick, Jr., a Buffalo businessman who died in 1986. Chisholm had no children and moved to Florida when she retired.

Chisholm announced her retirement from Congress in 1982. Her seat was won by a fellow Democrat, Major Owens, in 1983.

After retirement she resumed her career in education, teaching politics and women's studies and being named to the Purington Chair at Mount Holyoke College from 1983 to 1987. In 1985 she was a visiting scholar at Spelman College. In 1984 and 1988, she campaigned for Jesse Jackson for the presidential elections. In 1990, Chisholm, along with 15 other African-American women and men, formed the African-American Women for Reproductive Freedom. In 1993, then-President Bill Clinton nominated her to the ambassadorship to Jamaica, but she could not serve due to poor health. In the same year she was inducted into the National Women's Hall of Fame.

Chisholm retired to Florida and died on January 1, 2005, in Ormond Beach near Daytona Beach. She was buried in Forest Lawn Cemetery in Buffalo, New York.

In February 2005, Shirley Chisholm '72: Unbought and Unbossed, a documentary film, aired on U.S public television. It chronicled Chisholm's 1972 bid for the Democratic presidential nomination. It was directed and produced by independent, African-American filmmaker Shola Lynch. The film was featured at the Sundance Film Festival in 2004. On April 9, 2006, the film was announced as a winner of a Peabody Award.

In 1975, Chisholm was awarded an Honorary Doctor of Laws degree by Smith College.

In 1993, she was inducted into the National Women's Hall of Fame.

All content from Kiddle encyclopedia articles (including the article images and facts) can be freely used under Attribution-ShareAlike license, unless stated otherwise. Cite this article:
Shirley Chisholm Facts for Kids. Kiddle Encyclopedia.