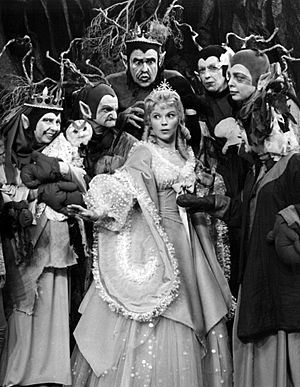 Shirley Temple's Storybook is a television series hosted and narrated by actress Shirley Temple. Its first season of 16 episodes (mostly in black and white) aired on NBC between January 12, 1958 and December 21, 1958. The second season of 25 episodes (all in color) aired on NBC as The Shirley Temple Show between September 18, 1960 and July 16, 1961. Fairy tales, children's stories, and some maturer material like The House of Seven Gables were adapted for the series.

Well known stars like Charlton Heston and Elsa Lanchester appeared in the series. Several books such as Shirley Temple's Stories That Never Grow Old were published around the time the series aired. In 1961, the series was nominated for a prime time Emmy Award for "Outstanding Achievement in the Field of Children's Programming". Selected episodes have been released to VHS and DVD.

All content from Kiddle encyclopedia articles (including the article images and facts) can be freely used under Attribution-ShareAlike license, unless stated otherwise. Cite this article:
Shirley Temple's Storybook Facts for Kids. Kiddle Encyclopedia.