Ivana Baquero Macías (born 11 June 1994) is a Spanish actress. At the age of 11, she was chosen by director Guillermo del Toro to star as Ofelia in Pan's Labyrinth, for which she won critical acclaim and the Goya Award for Best New Actress. In 2015, she was cast as Eretria in the television series The Shannara Chronicles.

Baquero was born in Barcelona, Spain, the daughter of Iván Baquero and Julía Macías. She attended the American School of Barcelona, where she learned to speak fluent English, Spanish and Catalan. She graduated in 2012. 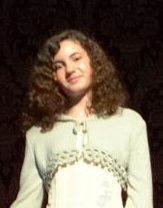 Baquero started acting professionally at the age of eight, playing a few small roles in a number of films before being cast in Pan's Labyrinth in 2006. The most notable of these early films is Fragile, in which she played a minor role alongside Calista Flockhart and Richard Roxburgh. She was in a number of other films including Romasanta and Rottweiler. She has also appeared on Spanish television on a few occasions.

From about 1,000 young actresses, Baquero was picked to play the role of Ofelia in Pan's Labyrinth. The role of Ofelia was originally intended for a girl of the age of 8, but the script was altered to accommodate Baquero, who was 11 at the time. Afterward, she worked in various projects while still attending school.

In 2009, she played the title role in John Connolly's horror film, The New Daughter, with Kevin Costner, marking her first American role.

In 2015, Baquero was cast in The Shannara Chronicles, an MTV television adaptation of the Shannara novel series by Terry Brooks, in which she plays the role of Eretria; the show premiered in January 2016.

All content from Kiddle encyclopedia articles (including the article images and facts) can be freely used under Attribution-ShareAlike license, unless stated otherwise. Cite this article:
Ivana Baquero Facts for Kids. Kiddle Encyclopedia.