Close Encounters of the Third Kind facts for kids

Close Encounters of the Third Kind is a 1977 American science fiction film written and directed by Steven Spielberg, and starring Richard Dreyfuss, Melinda Dillon, Teri Garr, Bob Balaban, Cary Guffey, and François Truffaut. It tells the story of Roy Neary, an everyday blue-collar worker in Indiana, whose life changes after an encounter with an unidentified flying object (UFO).

Close Encounters was a long-cherished project for Spielberg. The title is derived from Ufologist J. Allen Hynek's classification of close encounters with aliens, in which the third kind denotes human observations of aliens or "animate beings." 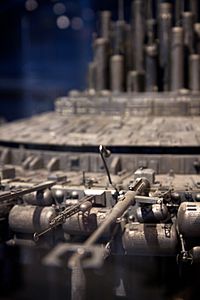 Made on a production budget of $20 million, Close Encounters was released in a limited number of cities on November 16, 1977 and November 23, 1977 before expanding into wide release the following month. It was a critical and financial success, eventually grossing over $300 million worldwide.

In December 2007, it was deemed "culturally, historically, or aesthetically significant" by the United States Library of Congress and selected for preservation in the National Film Registry. A Special Edition of the film, featuring additional scenes, was released theatrically in 1980.

A third cut of the film was issued on VHS and LaserDisc in 1998 (and later DVD and Blu-ray). The film was remastered in 4K and re-released in theatres on September 1, 2017 for its 40th anniversary. 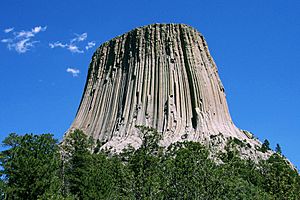 Devils Tower in Wyoming was used as a filming location

Principal photography began on May 16, 1976, though an Associated Press report in August 1975 had suggested filming would start in late 1975. Spielberg did not want to do any location shooting because of his negative experience on Jaws and wanted to shoot Close Encounters entirely on sound stages, but eventually dropped the idea.

Douglas Trumbull was the visual effects supervisor, while Carlo Rambaldi designed the aliens. Trumbull joked that the visual effects budget, at $3.3 million, could have been used to produce an additional film. His work helped lead to advances in motion control photography.

The mother ship was designed by Ralph McQuarrie and built by Greg Jein. The look of the ship was inspired by an oil refinery Spielberg saw at night in India. Instead of the metallic hardware look used in Star Wars, the emphasis was on a more luminescent look for the UFOs. One of the UFO models was an oxygen mask with lights attached to it, used because of its irregular shape.

As a subtle in-joke, Dennis Muren (who had just finished working on Star Wars) put a small R2-D2 model onto the underside of the mothership. The model of the mothership is now on display in the Smithsonian Institution's Air and Space Museum Udvar-Hazy Annex at Washington Dulles Airport in Chantilly, Virginia.

The small aliens in the final scenes were played by local girls. That decision was requested by Spielberg because he felt "girls move more gracefully than boys."

Puppetry was attempted for the aliens, but the idea failed. However, they successfully used puppetry to depict two of the aliens, the first being a marionette (for the tall alien that is the first to be seen emerging from the mothership) and an articulated puppet for the alien that communicates via hand signals with Lacombe near the end of the film.

Post-production was completed by June 1977, too late for the film to be released as a 'summer blockbuster' which might have been just as well, as Star Wars opened that summer.

The score for the film was composed, conducted and produced by John Williams. Williams wrote over 300 examples of the iconic five-tone motif for Close Encounters—the five tones are used by scientists to communicate with the visiting spaceship as a mathematical language—before Spielberg chose the one incorporated into the film's signature theme.

Close Encounters "suggests that humankind has reached the point where it is ready to enter the community of the cosmos. While it is a computer which makes the final musical conversation with the alien guests possible, the characteristics bringing Neary to make his way to Devils Tower have little to do with technical expertise or computer literacy. These are virtues taught in schools that will be evolved in the 21st century." The film also evokes typical science fiction archetypes and motifs. The film portrays new technologies as a natural and expected outcome of human development and indication of health and growth.

Alongside Star Wars and Superman, Close Encounters led to the reemergence of science fiction films. In 1985 Spielberg donated $100,000 to the Planetary Society for Megachannel ExtraTerrestrial Assay.

In 2011, ABC aired a primetime special, Best in Film: The Greatest Movies of Our Time, that counted down the best movies chosen by fans based on results of a poll conducted by ABC and People magazine. Close Encounters of the Third Kind was selected as the #5 Best Sci-Fi Film.

All content from Kiddle encyclopedia articles (including the article images and facts) can be freely used under Attribution-ShareAlike license, unless stated otherwise. Cite this article:
Close Encounters of the Third Kind Facts for Kids. Kiddle Encyclopedia.