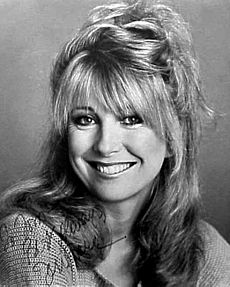 Teri Garr (born December 11, 1944) is an American movie and television actress. Her movie debut was the 1963 movie A Swingin' Affair. Her career breakthrough was in 1974 with the movie Young Frankenstein. Garr has acted in many other movies. She has been acting on TV since the late 1960s. She appeared on Star Trek: The Original Series. She has multiple sclerosis. Garr was born in Lakewood, Ohio.

In 1983 she was nominated for "Best Supporting Actress" in Tootsie.

In October 2002, Garr said that she was battling multiple sclerosis.

All content from Kiddle encyclopedia articles (including the article images and facts) can be freely used under Attribution-ShareAlike license, unless stated otherwise. Cite this article:
Teri Garr Facts for Kids. Kiddle Encyclopedia.