North Hollywood is a neighborhood in the San Fernando Valley region of the city of Los Angeles. It is home to the NoHo Arts District and the Academy of Television Arts & Sciences, and it has seven public and eight private schools.

There is a municipal park and a recreation center. The neighborhood is an important transportation center, and it is also a place where many notable people have lived or worked.

North Hollywood was established by the Lankershim Ranch Land and Water Company in 1887. It was first named "Toluca" before being renamed "Lankershim" in 1896 and finally "North Hollywood" in 1927. It is not contiguous with Hollywood, being separated by other parts of the San Fernando Valley and the Hollywood Hills.

The 2000 U.S. census counted 77,848 residents in the 5.87-square-mile North Hollywood neighborhood—or 13,264 people per square mile, about an average population density for the city but among the highest for the county. In 2008, the city estimated that the population had increased to 87,241. In 2000 the median age for residents was 30, considered an average age for city and county neighborhoods; the percentage of residents aged 19 to 34 was among the county's highest.

The neighborhood was considered "moderately diverse" ethnically within Los Angeles. The breakdown was Latinos, 57.7%; whites, 27%; Asians, 5.7%; blacks, 5.6%; and others, 4%. Mexico (43.2%) and El Salvador (16%) were the most common places of birth for the 46.4% of the residents who were born abroad—a high percentage for Los Angeles. The percentages of never-married men and never-married women were among the county's highest.

The median yearly household income in 2008 dollars was $42,791, considered average for the city but low for the county. The percentages of households that earned $40,000 or less were high for the county. Renters occupied 75.4% of the housing stock, and house- or apartment-owners held 24.6%.

"North Hollywood" is a broad term; some may generally refer to the area between Burbank and State Route 170 south of Sherman Way as "North Hollywood", even including areas not strictly a part of the neighborhood. 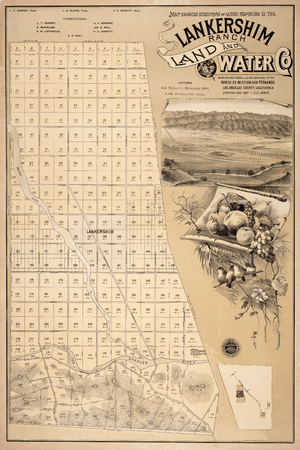 Main page: History of the San Fernando Valley to 1915

North Hollywood was once part of the vast landholdings of the Mission San Fernando Rey de España, which was confiscated by the government during the Mexican period of rule.

A group of investors assembled as the San Fernando Farm Homestead Association purchased the southern half of the Rancho Ex-Mission San Fernando. The leading investor was Isaac Lankershim, a Northern California stockman and grain farmer, who was impressed by the Valley's wild oats and proposed to raise sheep on the property. In 1873, Isaac Lankershim's son and future son-in-law, James Boon Lankershim and Isaac Newton Van Nuys, moved to the San Ferndando Valley and took over management of the property. Van Nuys thought the property could profitably grow wheat using the dryland farming technique developed on the Great Plains and leased land from the Association to test his theories. In time the Lankershim property, under its third name, the Los Angeles Farming and Milling Company, would become the world's largest wheat-growing empire.

In October 1887, J.B. Lankershim and eight other developers organized the Lankershim Ranch Land and Water Company, purchasing 12,000 acres (49 km2) north of the Cahuenga Pass from the Lankershim Farming and Milling Company. Lankershim established a townsite which the residents named Toluca along the old road from Cahuenga Pass to San Fernando. On April 1, 1888, they offered ready-made small farms for sale, already planted with deep-rooted deciduous fruit and nut trees—mostly peaches, pears, apricots, and walnuts—that could survive the rainless summers of the Valley by relying on the high water table along the Tujunga Wash rather than surface irrigation. 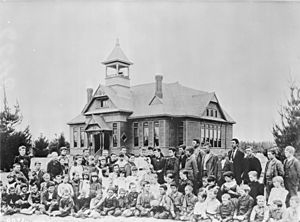 Lankershim School, located near what is now the intersection of Vineland and Riverside, and the first school in the San Fernando Valley, c.1889

The land boom of the 1880s went bust by the 1890s, but despite another brutal drought cycle in the late 1890s, the fruit and nut farmers remained solvent. The Toluca Fruit Growers Association was formed in 1894. The next year the Southern Pacific opened a branch line slanting northwest across the Valley to Chatsworth. The Chatsworth Limited made one freight stop a day at Toluca, though the depot bore the new name of Lankershim. With the post office across the street being called Toluca, controversy over the town's name continued, and the local ranchers used to quip, "Ship the merchandise to Lankershim, but bill it to Toluca." In 1896, under pressure from Lankershim, the post office at Toluca was renamed "Lankershim" after his father, although the new name of the town would not be officially recognized until 1905.

By 1903, the area was known as "The Home of the Peach". In 1912, the area's major employer, the Bonner Fruit Company, was canning over a million tons of peaches, apricots, and other fruits. When the Los Angeles Aqueduct opened in 1913, Valley farmers offered to buy the surplus water, but the federal legislation that enabled the construction of the aqueduct prohibited Los Angeles from selling the water outside of the city limits.

At first resistance to the real-estate development and downtown business interests of Los Angeles remained strong enough to keep the small farmers unified in opposition to annexation. However, the fruit packing company interests were taken over by the Los Angeles interests. The two conspired to decrease prices and mitigate the farmers' profit margins, making their continued existence tenuous. When droughts hit the valley again, rather than face foreclosure, the most vulnerable farmers agreed to mortgage their holdings to the fruit packing company and banks in Los Angeles for the immediate future and vote on annexation. 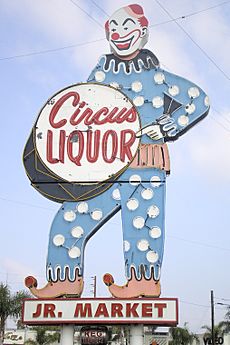 West Lankershim (more or less today's Valley Village) agreed to be annexed to the City of Los Angeles in 1919, and Lankershim proper in 1923. Much of the promised water delivery was withheld, and many of the ranchers one by one had their holding foreclosed or transferred to the packing companies. In turn, these were bought up by the real-estate developers and by the late 20's a massive effort was underway to market the area to prospective home owners throughout the country. As part of this effort, in 1927, in an effort to capitalize on the glamour and proximity of Hollywood, Lankershim was renamed "North Hollywood". The result was a massive development of housing which transformed the area into a suburban development of Los Angeles.

Starting in the late fifties, many of the original owners were aging, and their children were moving to other areas. School integration in the subsequent years, blockbusting, and subsequent ethnic turmoil encouraged many remaining families to move out, who in turn were replaced with black and Hispanic families moving from the downtown areas. By the 1990s, the demographic changes had almost completely transformed the region.

North Hollywood was also the site of an infamous shootout that took place in 1997. 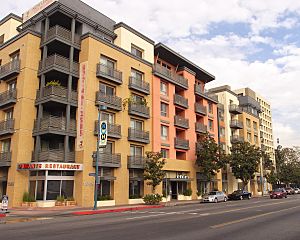 Since 2000, the community has been undergoing many changes and developing, thanks in large part to the formation of the 743-acre North Hollywood Development District and the subsequent NoHo Commons projects. These projects attempt to recapture North Hollywood's historic image and restore the area's economy. Consequently, North Hollywood's landscape has been transformed, with condominium towers (including a 15-story building on Lankershim Boulevard) appearing in the midst of older one-story bungalows and small apartment complexes. The community is changing from a suburb-like setting into a metropolitan center, in large part as a result of the construction of Metro Stations for the Red Line and the Orange Line, two lines that have made the neighborhood into a regional hub for the San Fernando Valley. Medium- and high-density developments are being built around the Metro Station, particularly in the NoHo Arts District, with the intent of creating a walkable urban village.

In 2015 Lankershim Boulevard in North Hollywood was part of the first San Fernando Valley CicLAvia, an event sponsored by the Los Angeles County Metropolitan Transportation Authority in which major roads are temporarily closed to motorized vehicle traffic and used for recreational human-powered transport. 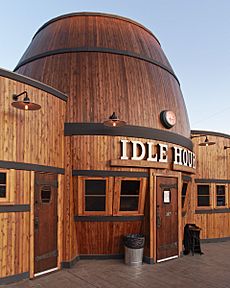 North Hollywood is home to the Academy of Television Arts & Sciences.

Pierce Brothers Valhalla Memorial Park is located in the area, and is notable for the Portal of the Folded Wings Shrine to Aviation.

Universal Studios is also located on the border between Hollywood and North Hollywood, easily accessible through one of NoHo's main streets, Lankershim Blvd.

The North Hollywood Recreation Center is mostly in North Hollywood, with a portion in Valley Village. The park has an auditorium, lighted indoor baseball diamond courts, lighted outdoor baseball diamonds, lighted outdoor basketball courts, a children's play area, lighted handball courts, picnic tables, an outdoor unheated seasonal pool, and lighted tennis courts. In addition the center has an indoor gymnasium which can be used as a second auditorium and a community room; the gymnasium's capacity is 250 people.

All content from Kiddle encyclopedia articles (including the article images and facts) can be freely used under Attribution-ShareAlike license, unless stated otherwise. Cite this article:
North Hollywood, Los Angeles Facts for Kids. Kiddle Encyclopedia.