Sun Valley is a neighborhood in the San Fernando Valley region of the city of Los Angeles, California. The neighborhood is known for its overall youthful population and moderate racial diversity. There are three recreation centers in Sun Valley, one of which is a historic site. The neighborhood has thirteen public schools — including John H. Francis Polytechnic High School and Sun Valley High School — and four private schools.

The 2000 U.S. census counted 75,848 residents in the 9.42-square-mile Sun Valley neighborhood—or 8,048 people per square mile, about an average population density for the city. In 2008, the city estimated that the population had increased to 81,788. In 2000 the median age for residents was 28, considered young for city and county neighborhoods; the percentage of residents aged 10 or younger was among the county's highest.

The median yearly household income in 2008 dollars was $51,290, considered average for the city but low for the county. The percentages of households that earned $20,000 to $60,000 were high for the county. Renters occupied 46.1% of the housing stock, and house or apartment-owners held 53.9%.

Situated at the base of the Verdugo Mountains, Sun Valley is prone to flash floods, and one such flood on Sunday, February 20, 2005 at 2237 (10:37 PM PST) destroyed a portion of the 8000 block of Tujunga Avenue and killed a Los Angeles City civil engineer when a sinkhole 30 feet deep opened.

Relation of Sun Valley to nearby places, not necessarily contiguous: 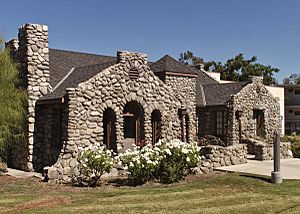 In 1874, California State Senator Charles Maclay (for whom Maclay Street in San Fernando is named) acquired 56,000 acres (230 km2) of land across the San Fernando Valley. The area extended from Sunland Blvd. all the way west to the Chatsworth Hills. East of Sunland was Rancho San Rafael, a large land grant to José María Verdugo by the Spanish Crown.

By 1876, the Southern Pacific Railroad was constructed through the eastern San Fernando Valley, linking Southern and Northern California. The area once had a general store named Roberts Store, and the town was named Roberts until the 1890s when the name was changed to Roscoe. The current name of Sun Valley was chosen in 1950 by residents.,

All content from Kiddle encyclopedia articles (including the article images and facts) can be freely used under Attribution-ShareAlike license, unless stated otherwise. Cite this article:
Sun Valley, Los Angeles Facts for Kids. Kiddle Encyclopedia.