Valley Glen is a highly diverse community in the southeastern portion of the San Fernando Valley in Los Angeles, California. Almost half its residents were born outside the United States. It includes a community college, seven public schools—including a high school—and six private schools. There is a city park. Valley Glen is noted for a half-mile-long California-history mural painted on the side of a flood-control channel. 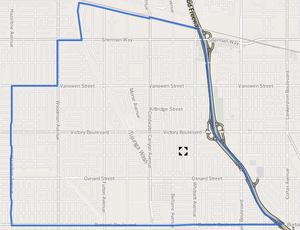 Ethnically, Valley Glen is "highly diverse," with Latinos at 45.2%, whites at 39.5%, Asians at 5.4%, blacks at 3.9% and others at 6%. It is also high within the city for the percentage of foreign born (49%), with Mexico (26.9%) and Armenia (14.4%) being the most common foreign places of birth. In other respects — population density, income, university education, age, homeowners, military service, it is "about average" for the city of Los Angeles. Twenty-one percent of Valley Glen residents aged 25 and older had earned a four-year degree by 2000, an average figure for both the city and the county.

In the "Mapping L.A." geographical section of the Los Angeles Times website, the 4.81 square miles of Valley Glen are bounded on the north by Raymer Street, Sherman Way or Vanowen Street, on the west by the Tujunga Wash, Woodman Avenue or Hazeltine Avenue, on the south by Burbank Boulevard and on the east by the Hollywood Freeway. In most of its area it is bisected by the Tujunga Wash, which runs north to south.

Relation of Valley Glen to nearby places, not necessarily contiguous:

The Great Wall of Los Angeles, a half mile-long mural portraying the history of California "as seen through the eyes of women and minorities," stretches along the concrete sides of the Tujunga Wash, and is credited with being one of the longest murals in the world,

All content from Kiddle encyclopedia articles (including the article images and facts) can be freely used under Attribution-ShareAlike license, unless stated otherwise. Cite this article:
Valley Glen, Los Angeles Facts for Kids. Kiddle Encyclopedia.