Panorama City is a neighborhood in the city of Los Angeles, California, in the San Fernando Valley. It has a generally young age range as well as the highest population density in the Valley. Ethnically, more than half of its population was born abroad, a higher percentage than Los Angeles as a whole. Known as the valley's first planned community after a transition from agriculture to a post-World War II housing boom, it has produced several notable residents. It is now a mixture of single-family homes and low-rise apartment buildings. 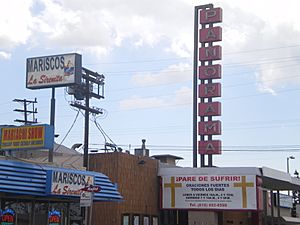 Panorama City is known as the San Fernando Valley's first planned community. In 1948, it was developed as such by residential developer Fritz B. Burns and industrialist Henry J. Kaiser. Burns, seeing the tremendous potential fortune that could be made as large numbers of World War II veterans came home and started families, teamed up with Kaiser in 1945 to form Kaiser Community Homes. The vast majority of the houses were bought with loans issued by the FHA or the Servicemen's Readjustment Act of 1944, better known as the G.I. Bill. Homes in the area were sold with racially discriminatory covenants. A "Conditions, Covenants, Restrictions" document filed with the county recorder declared that no Panorama City lot could be "used or occupied by any person whose blood is not entirely that of the white or Caucasian race." Such restrictive covenants, which sometimes also limited ownership to people "of the Christian faith", were common in many communities at the time, and although rendered legally unenforceable by the Civil Rights Act of 1968 they may still be found on some older property deeds. De facto integration was accelerated by the Community Reinvestment Act of 1977. The CRA-insured credit was provided to the entire community without regard to race or income, causing white flight as with many other areas of the San Fernando Valley. During the period of forced school busing, Panorama City was exempted due to its diversity.

In its history, Panorama City was once adjacent to General Motors' largest assembly plant to date. Today, the Van Nuys Assembly plant has been replaced with a large shopping center named The Plant, which includes stores and restaurants such as Regency Theatres, Ross, Babies "R" Us, The Home Depot, Hometown Buffet, In-N-Out Burger, Starbucks Coffee and others.

For the most part, the community is a mixture of small single-family homes and low-rise apartment buildings.

The oldest IHOP in the world is located at 8555 Vesper Avenue.

Relation of Panorama City to nearby places, not necessarily contiguous:

In 2008, the Los Angeles Times Mapping L.A. project described Panorama City as an area that was "moderately diverse" ethnically, with a high percentage of Latinos and a significant population of Filipinos. Filipinos and Mexicans were the most common ancestries in the neighborhood. At that time, the breakdown was Latinos, 70.1%; whites, 11.5%; Asians, 11.9%; blacks, 4.3%; and others, 2.2%. Mexico (52.1%) and El Salvador (13.4%) were the most common places of birth for the 55.0% of the residents who were born outside of the United States—a high percentage for Los Angeles.

There were 2,849 families headed by single parents. The rate of 20.2% was considered to be a high one. There were 1,837 veterans, or 4.3% of the population, a low percentage compared to the rest of the city and county.

Panorama City was the largest center of major retail outlets in the San Fernando Valley, starting with the opening of what would later become the Panorama Mall in 1955. At the time, this small complex included The Broadway and five other stores. Three other major department stores — Ohrbachs, J. W. Robinson's and Montgomery Ward – opened nearby over the next ten years, and they were marketed collectively as the Panorama City Shopping Center. By the 1970s, the area had lost business to nearby communities. The freestanding Ohrbach's building, designed by the architectural firm Welton Becket and Associates, is significant in that it represents "an early and important phase of commercial development" in the neighborhood. It is now the site of the Valley Indoor Swap Meet.

The Panorama Mall remains an important local mall, with a Walmart and Curacao discount stores, the latter catering to the Hispanic market.

Thirteen percent of Panorama City residents aged 25 and older had earned a four-year degree by 2000, an average percentage for both the city and the county. The percentage of the same-age residents with less than a high school diploma was high for the county.

Schools within the Panorama City boundaries are: 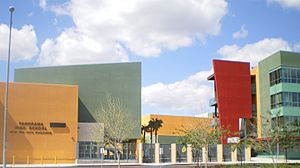 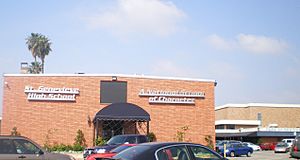 All content from Kiddle encyclopedia articles (including the article images and facts) can be freely used under Attribution-ShareAlike license, unless stated otherwise. Cite this article:
Panorama City, Los Angeles Facts for Kids. Kiddle Encyclopedia.