Kids Encyclopedia Facts
This page is about the community in Los Angeles, California. For other uses, see Arleta (disambiguation).

Arleta is a "moderately diverse" community in the San Fernando Valley region of Los Angeles, California, with a high percentage of Latino residents and of people born outside the United States.The neighborhood is considered average among the city's districts. There are five public but no private schools within Arleta.

Arleta is bordered by the Los Angeles districts of Mission Hills and North Hills on the north, Sun Valley on the east, Pacoima on the northeast, and Panorama City on the west. It lies within the 6th City Council district.

The 2000 U.S. census counted 31,068 residents in the 3.10-square-mile Arleta neighborhood—or 10,034 people per square mile, an average population density for the city. In 2008, the city estimated that the population had increased to 32,622. In 2000 the median age for residents was 29, about average for city neighborhoods. The percentage of residents aged 11 to 18 was among the county's highest.

The neighborhood was considered "moderately diverse" ethnically within Los Angeles, with a relatively high percentage of Latinos. The breakdown was Latinos, 71.7%; Asians, 11.0%; whites, 13.2%; blacks, 2.2%; and others, 1.9%. Mexico (55.3%) and El Salvador (11.2%) were the most common places of birth for the 46% of the residents who were born abroad—which was a high percentage for Los Angeles.

The median yearly household income in 2008 dollars was $65,649, considered average for the city. Renters occupied 19.6% of the housing stock, and house- or apartment-owners held 80.4%. The average household size of 4.0 people was considered high for Los Angeles. The 11.5% of families headed by single parents was considered about average for city neighborhoods. 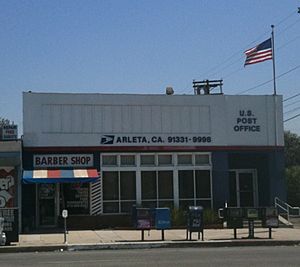 Arleta was also the filming location for the fictitious McFly family in the Back to the Future series.

All content from Kiddle encyclopedia articles (including the article images and facts) can be freely used under Attribution-ShareAlike license, unless stated otherwise. Cite this article:
Arleta, Los Angeles Facts for Kids. Kiddle Encyclopedia.