Kirk Thomas Cameron (born October 12, 1970) is an American actor best known for playing "Mike Seaver" on the television situation comedy, Growing Pains, and in other television shows and movies. He was the main actor in the Left Behind movie series and in Fireproof. He is also an active Christian evangelist, and works with Ray Comfort on The Way of the Master. He co-started The Firefly Foundation with his wife, actress Chelsea Noble.

Cameron was born on October 12, 1970 in Panorama City, California. His parents are Robert Cameron, a retired school teacher, and Barbara Bausmith, a stay-at-home mom. He is the brother to Bridgette, Melissa, and Candace Cameron, who is played "D.J. Tanner" on the television sitcom, Full House. He would go to school on the set of Growing Pains, as opposed to a normal school. He graduated at age 17 with high honors. 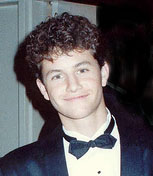 Cameron as a young adult.

Cameron began acting at the age of nine, and his first job was for a breakfast cereal. His first starring role was at the age of ten in the television series Two Marriages. At this age, he appeared in several television shows and movies. He became famous after being cast as "Michael Seaver" in the 1985 television series Growing Pains. In the series, Seaver's girlfriend was Kate MacDonald, who was played by Chelsea Noble, Cameron's future wife. Cameron subsequently became a teen heartthrob in the late 1980s, while appearing on the covers of several teen magazines, including Tiger Beat, Teen Beat, 16 and others. At the time, he was making $50,000 a week. He was also in a 60-second Pepsi commercial during Super Bowl XXIV.

Cameron went on to star in many movies, for example 1987's Like Father Like Son, which made a lot of money. His next movie, 1989's Listen to Me, did not make very much money. When Growing Pains ended in 1992, Cameron went on to star in the sitcom Kirk which began in 1995 and ended two years later. In Kirk, Cameron played Kirk Hartman, a 24-year-old who has to raise his siblings. Cameron and Noble also worked together on Kirk.

Ten years after Growing Pains ended, was a part of The Growing Pains Movie, in 2000, and Growing Pains: Return of the Seavers, in 2004. Cameron has also often worked in Christianity-related movies, among them the post-Rapture movies Left Behind: The Movie, Left Behind II: Tribulation Force, and Left Behind: World at War, in which he plays Cameron "Buck" Williams. Cameron's wife Noble also starred in these movies, playing Hattie Durham. Cameron has worked with Cloud Ten Pictures, and has been in several of their movies. He was also in Fireproof, which was made by Sherwood Pictures. They only spent $500,000 making the movie. Cameron as the main actor, playing Captain Caleb Holt. Though it was a did not cost much money to make, the movie made $33,415,129. Cameron said, "[Fireproof is] the best work of my life."

Cameron was once an atheist, but around the age of 17-18, during the height of his career on Growing Pains, he developed a belief in God, and became a Christian. After converting to Christianity, he began to insist that storylines be stripped of anything he thought to be too adult or racy in Growing Pains. The cast ostracized him from their activities. They did not attend his wedding, nor was he invited to any of theirs. A decade later, Cameron agreed to appear in The Growing Pains Movie, where the entire main cast reunited with one another. Cameron said,

"It’s a lot less crazy of a time than when we were teenagers. It’s an opportunity to begin new friendships as adults, and I’m really looking forward to that."

Cameron currently partners with fellow evangelist Ray Comfort, training Christians in evangelism. Together, they founded the ministry of The Way of the Master, which is best known for its award-winning television show Cameron co-hosts. It also formerly featured a radio show known as The Way of the Master Radio with talk show host Todd Friel. The radio show was later canceled, and Wretched Radio began, hosted by Friel. He, with wife Noble, founded The Firefly Foundation, which runs Camp Firefly, an organization that gives terminally ill children and their families a free week's vacation.

Cameron and Comfort were a part in a debate on television with atheists Brian Sapient and Kelly O'Conner of the Rational Response Squad, at Calvary Baptist Church in Manhattan on May 5, 2007. It was moderated by ABC's Martin Bashir and parts of it were played on Nightline. They debated whether or not there is a God. Some of the people in the audience believed in God, and some did not.

All content from Kiddle encyclopedia articles (including the article images and facts) can be freely used under Attribution-ShareAlike license, unless stated otherwise. Cite this article:
Kirk Cameron Facts for Kids. Kiddle Encyclopedia.