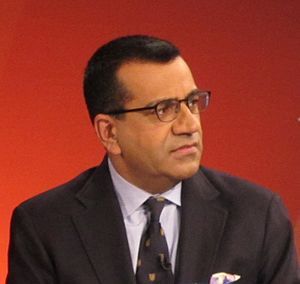 Martin Bashir (born 19 January 1963) is a British journalist. He is known for interviewing Princess Diana in 1995 and Michael Jackson in the 2003 documentary Living with Michael Jackson. That year he was voted the fifth 'worst Briton'. He started being a journalist in 1986. He worked with BBC until 1999. Then he joined ITV. In December 2010 he joined MSNBC. He hosted Martin Bashir on MSNBC on weekdays.

In December 2013 Bashir stopped working at the MSNBC.

Bashir was born to Pakistani parents in Wandsworth in South London. He speaks English and Urdu.

All content from Kiddle encyclopedia articles (including the article images and facts) can be freely used under Attribution-ShareAlike license, unless stated otherwise. Cite this article:
Martin Bashir Facts for Kids. Kiddle Encyclopedia.