Full House is an American comedy television series set in San Francisco. It originally aired from 1987 to 1995. It told the story of Danny Tanner (Bob Saget), a man whose wife has died and is left alone with his three daughters, DJ (Candace Cameron), Stephanie (Jodie Sweetin), and Michelle (Mary-Kate and Ashley Olsen). He recruits his best friend, Joey Gladstone (Dave Coulier), a child-like stand-up comedian, and his brother-in-law (and the girls' uncle) Jesse Katsopolis (John Stamos), a struggling musican, to move in and help look after the girls.

The series is often criticised for its sickly sweet and unrealistic plotline and corny jokes, even though it ran for many years; some episodes dealt with real problems such as child abuse, drinking, and lying. Yet it has remained, in recent years, one of the very few adult comedy series that parents can watch with their kids.

In August 2014 it was announced that plans were underway to reboot the series which would reunite most of the original cast. 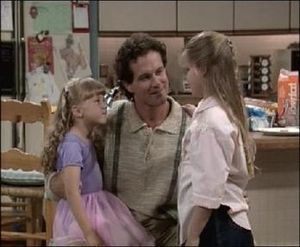 John Posey as Danny Tanner in the pilot (shown with Sweetin and Cameron as Stephanie and D.J.)

Jesse Katsopolis is the brother-in-law of Danny, the younger brother of Pam and the uncle of her daughters D.J., Stephanie and Michelle. One day, Jesse marries Rebecca "Becky" Donaldson. He becomes a father of twins, Nicky and Alex. His real name is Hermes Katsopolis, but as a child, he was mocked. So he asked his parents to change his first name in Jesse. When he became an adult, he learnt to appreciate his real name. Nevertheless he wants to be called Jesse. He is possessed by his hair. He often talks about it and treat it. In the beginning he had long hair. When Stephanie cut his long hair by mistake, Jesse was complete upset. In contrast to Danny, Jesse often tends to careless decisions and inappropriate behaviour, especially if it's about to be well off with his nieces. He allows the girls many things, which the father wouldn't approve it. In time Jesse shows his adult side. When he gets excitement, he often uses the saying: "Have Mercy". Apart from adoring his hair, Jesse is a big fan of Elvis Presley. He's also a musician and singer of the band "Jesse and the Rippers". Although they have a lot of minor gigs, their sucess is not remarkable. That's why he has to work for the company of his father as a pest controller on the side. In addition to that, Jesse strives for a career  in the advertising and composes jingles with Joey, which he sells to different companies. In the sixth season it becomes well-known that Jesse has no high school diploma. He keeps it secret from his family. When the truth brings to light, he catches up on his final exam. Later, he presents the popular radio show "Rush Hour Renegades" with Joey. He becomes an owner of a nightclub called "The Smash Club" in the seventh season and after that he creates a new band "Hot Daddy" and "The Monkey Puppets".

Danny Tanner is the father of D.J., Stephanie and Michelle. His wife died in a traffic accident, which caused a drunk car driver. That's why he looks after his daughters many times. Besides, Jesse and Joey help him. Danny is shown as a demanding father of the nineties. He speaks to his daughters or his friends honest. When they have problems, Danny helps them to solve it. He brings up his children in an old-fashioned way. But Jesse and Joey have a modern way, which Danny's daughters prefer. Danny loves to clean his house, especially his furniture. He is enthusiastic to do the spring-cleaning every day. His daughters and his both friends are not very fascinated. Danny's characteristic is to digress from a topic talking too much. His fellow men don't like it. In the beginning Danny works for the local news broadcast "Canal 8". In the second season he becomes a co-moderator of Rebecca Donaldson, who marries Jesse later, at the morning show "Wake Up, San Francisco". During the series, Danny tries to find a new wife, but it always doesn't work, because he always criticize anyone woman. He gets to know his co-moderator Vicky Larson, who stands in for the pregnant woman Becky. Danny falls in love with her. In the sixth season, they get engaged to each other. But when Vicky gets an offer to work in New York, they separate. In the eighth season, he meets the single mother Claire Mahan and they become a pair.

Joey Gladstone is the best friend of Danny Tanner from his childhood. When Danny's wife dies, he moves in with him helping him to bring up Danny's daughters D.J., Stephanie and Michelle. He settles the problems of the children very sensible and understanding. Because of it, it's abused his trust. Joey works as a Stand-up-Comedian. He likes to imitate comic-figure like Popeye, Bullwinkle J. Moose or Pepé Le Pew. In the beginning Joey doesn't have an own room in Danny's house. So, he sleeps in the niche of Danny's living room. So that Joey has privacy, Danny transforms his underground parking lot into a bedroom. Because he doesn't work normal, he takes care of Danny's children: He prepares the breakfast for them, he helps them to do the homeworks, he gets them to school and other activities. By the way, Joey often takes care of Michelle when she is a baby. But he never complains. He means, if he carries out the tasks, he feels a member of the family. Joey's father worked in the US Arms and brought up him very strict. Therefore, Joey had to suffer as a child and they hadn't a good contact. D.J. and Stephanie manage to end the argument. Pushing on with his job as a comedian. When the second season starts, he sells jingles with Jesse. On the side, Joey becomes a moderator of programme for children and plays in a popular daily soap. Later, he presents the popular radio show Rush Hour Renegades with Jesse. During the serie, Joey has a few relationships, but they don't work for a long time.

Rebecca Donaldson-Katsopolis is the Co-Moderator of Danny at Wake Up, San Francisco and later she becomes the wife of Jesse Katsopolis. She grew up in a farm in Valentine, Nebraska. Becky makes friend with Danny. During the serie, she turns out to a kind of mother for the daughters. Becky falls in love with Jesse, but she doesn't want to admit her feelings. They become a pair after some events. At the end of the second season during a trip with the family to Lake Tahoe, Jesse and Becky get engaged each other and want to marry immediate. At the wedding ceremony Becky sees that they don't ready yet for it. Finally they marry on Valentine's Day in the fourth season. After the wedding Jesse moves in with Becky. But she notices that he misses his family. Therefore she decides to live at the Tanners with Jesse. Creating a good place for them, Joey and Jesse change the loft of the house into an apartment. In the fifth season, she becomes mother of twins: Nicky and Alex. In the eighth season, Becky becomes the producer of Wake Up, San Francisco. Danny feels ignored and quits almost his job as moderator. During the Serie, Becky often tries to persuade Jesse travelling to Nebraska in holidays for visiting her parents. But Jesse doesn't like it. He recommends to travel to Graceland.

D.J. Tanner is the oldest daughter of Danny and Pam Tanner and the oldest sister of Stephanie and Michelle. In the beginning she is ten years old. D.J. is usually the daughter, who is shown as an example for her younger sisters. Although she often argues with them, she is very worried about them. D.J. is a straight-A student and Danny is very proud of it. In the first seasons, she often argues with her father, Jesse or Joey, because she doesn't always follow her limits. At the end she always realize her instructions and apologizes for her inappropriate behaviour. When Jesse and Joey move in with the family Tanner in the first episode, D.J. is forced to share her bedroom with Stephanie. Because she wants more privacy, she can convince her father to need an own room in the fifth season. Then Michelle gives her room D.J. and moves in with Steph. D.J.'s best friend is Kimmy Gibbler, a school friend. They're not similar. During the series, D.J. shows different interests, for example: music, ride a horse or karate. In the fourth season, she becomes an editor-in-chief of the school newspaper at her high school. In the course of growing up, D.J. takes care of seriously topics like puberty and boys. Her first real relationship is Steve Hale. They separate in the eighth season and decide to stay friends. During the last season, D.J. has relationships with the guitarist Viper and the rich Nelson. At the end, Steve accompanies D.J. to the final ball.

Stephanie Tanner is a sarcastic child of Danny and Pam Tanner. She's the younger sister of D.J. and the older sister of Michelle. Her mother died, when she was five years old. In the former seasons of the series, when she feels indignant, she often says "How rude!". Steph often spies on her sister D.J. For example, she reads her diary and listen into her telephone conversations. But she's always caught. Steph is the sportiest and most inquisitive of the Tanner family. Her best friends of the High School are Gia Mahan and Mickey. She meets them in the seventh season. She creates a girlband with Gia and two other friends, but the band disbands, because of her schooling. Stephanie is the only sister, who touches the hardest topics of young persons like the group pressure including smoking and flirting on parties. During the earlier years, her favorite toy is Mr. Bear (a soft toy), which means a lot to her, because it was the last gift of her mother before she died. Steph doesn't like D.J.'s best friend Kimmy Gibbler and often argues with her.

Michelle Tanner is the youngest daughter of Danny and Pam Tanner. The younger sister of D.J. and Stephanie and the spoiled baby of the family. Michelle was a baby, when her mother died. Therefore she is the only member of the family, who can't remember her. In the beginning of the series, Jesse and Joey's inexperience towards the contact of the baby causes a lot of funny situations. At first Michelle distinguishes with her childish manners. But her father often punishes her. When Michelle grows up, she becomes the centre of the series and is included in the series. Her best friends are the child next door Teddy and her classmate Denise. She also has other friends like Derek Boyd, Lisa Leeper and Aaron Bailey. Michelle's favorite toys are Barney (a furry teddy bear), which hangs on the wall above her bed, and her pink stuffed pig. Michelle a clhas ose relationship to his uncle Jesse. He allows her many things. Michelle is well-known to say sassy slogans like "Aw nuts", "You got it dude" and "You're in big trouble, mister".

All content from Kiddle encyclopedia articles (including the article images and facts) can be freely used under Attribution-ShareAlike license, unless stated otherwise. Cite this article:
Full House Facts for Kids. Kiddle Encyclopedia.