John Phillip Stamos (born August 19, 1963) is an American actor, producer, musician, and singer. He first gained recognition for his contract role as Blackie Parrish on the ABC television series General Hospital, for which he was nominated for the Daytime Emmy Award for Outstanding Supporting Actor in a Drama Series.

He is known for his work in television, especially in his starring role as Jesse Katsopolis on the ABC sitcom Full House. Since the show's finale in 1995, Stamos has appeared in numerous TV films and series. Since 2005, he has been the national spokesperson for Project Cuddle.

From 2005 to 2009, Stamos had a starring role on the NBC medical drama ER as Dr. Tony Gates. In September 2009, he began playing the role of Albert in the Broadway revival of Bye Bye Birdie.

From September 2015 to 2016, Stamos starred as the lead character in the Fox sitcom Grandfathered. As of 2016, he is an executive producer of the Netflix series Fuller House, in which he occasionally reprises the role of Jesse Katsopolis. 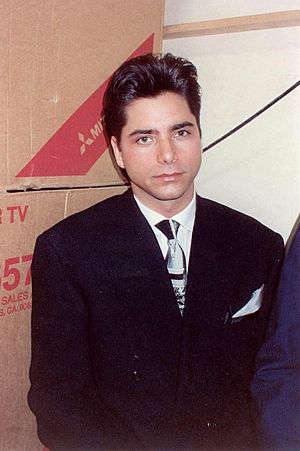 Stamos at the 1990 Grammy Awards

John Stamos was born on August 19, 1963 in Cypress, California to William "Bill" Stamos, a restaurateur, and Loretta (née Phillips). His father was of Greek descent, and his mother was of English and Irish ancestry. He has two sisters, Alaina and Janeen. In his youth, Stamos worked for his father's restaurants, and as a teenager had a job flipping burgers in the Orange County area.

He attended John F. Kennedy High School and played in the marching band there. At 15, he attended his first Beach Boys concert; a huge fan, he would later tour with the band. His parents were supportive of his aspiration to be an actor, and although he planned to enroll at Cypress College for the 1981 term, he skipped his first semester to focus on launching a career as an actor—with his father's blessing. After just three weeks, he landed his first role on General Hospital.

Stamos is a big fan of Elvis Presley and has often referenced or paid homage to him in the show Full House. Stamos began dating model/actress Rebecca Romijn in 1994. Stamos and Romijn became engaged on Christmas Eve 1997, and they married on September 19, 1998, at the Beverly Hills Hotel. They announced their separation in April 2004. Stamos filed for divorce in August 2004, and it became final on March 1, 2005.

On October 23, 2017, Stamos announced his engagement to model and actress Caitlin McHugh after a year of dating. In December 2017, the couple announced they are expecting their first child, due in the spring of 2018. Stamos and McHugh married in February 2018. On April 15, 2018, Stamos announced the birth of his first son, Billy, named after his father.

On May 19, 2018, John and Caitlin Stamos announced their new jewelry line, "St. Amos Jewelry" with 100% of the proceeds going to the Childhelp foundation.

All content from Kiddle encyclopedia articles (including the article images and facts) can be freely used under Attribution-ShareAlike license, unless stated otherwise. Cite this article:
John Stamos Facts for Kids. Kiddle Encyclopedia.