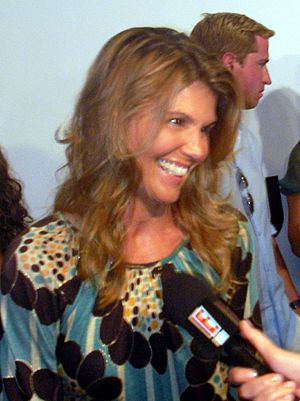 Lori Loughlin (born July 28, 1964 in Queens, New York) is an American actress. She acts mostly on television but has acted in some movies. She played Rebecca in the television sitcom Full House and Debbie Wilson in 90210. she was played as a cast member in the TV Show Dream Love.

Loughlin and her husband were among dozens charged by the FBI and U.S. Attorney's Office on March 12, 2019, in a large-scale nationwide college entrance exam cheating scandal.

All content from Kiddle encyclopedia articles (including the article images and facts) can be freely used under Attribution-ShareAlike license, unless stated otherwise. Cite this article:
Lori Loughlin Facts for Kids. Kiddle Encyclopedia.