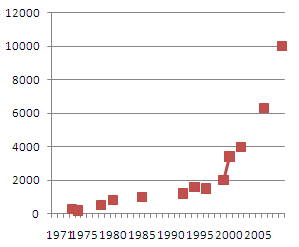 Number of CPAC attendees over time

The Conservative Political Action Conference (CPAC; SEE-pak) is an annual political conference in National Harbor, Maryland attended by conservative activists and elected officials from across the United States. CPAC is hosted by the American Conservative Union (ACU). More than 100 other organizations contribute in various ways.

In 2011, ACU took CPAC on the road with its first Regional CPAC in Orlando, Florida. Since then ACU has hosted regional CPACs in Chicago, Denver, St. Louis, and San Diego.

The conference was founded in 1973 by the American Conservative Union and Young Americans for Freedom as a small gathering of dedicated conservatives. Over the years it has grown to thousands of attendees annually. Roughly half of those in attendance in the past few years have been college-aged.

All content from Kiddle encyclopedia articles (including the article images and facts) can be freely used under Attribution-ShareAlike license, unless stated otherwise. Cite this article:
Conservative Political Action Conference Facts for Kids. Kiddle Encyclopedia.