National Harbor is a census-designated place (CDP) in Prince George's County, Maryland, United States, located along the Potomac River near the Woodrow Wilson Bridge and just south of Washington. It originated as a 300-acre (1.2 km2) multi-use waterfront development. The population was 3,788 at the 2010 census.

Land use and rezoning

The land developed for National Harbor was previously Salubria Plantation, built in 1827 by Dr. John H. Bayne. The plantation house burned down in 1981 and was offered for sale along with the surrounding land. The land was sold in 1984 and in 1994 was rezoned for mixed-use development. In the fall of 1997, the Maryland Department of the Environment and the Army Corps of Engineers approved new developer permits, granted for the PortAmerica project in 1988.

This development has caused considerable controversy due to its environmental impacts. The Sierra Club voiced strong objections in 1999 saying that construction of National Harbor would "prevent forever the completion of the Potomac Heritage Trail". The site was linked to hundreds of thousands of gallons of untreated sewage being discharged into the Potomac River in 2008. In 2006, Peterson Companies withdrew plans to build a Target where the remaining plantation building, the slave quarters, still stand. 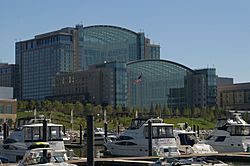 The Gaylord National Resort & Convention Center at National Harbor opened on April 1, 2008 in Oxon Hill, Maryland. The site is being developed by Milton Peterson's Peterson Companies with the project expected to cost well over $2 billion, and a construction time frame of 2007 to late 2014. As of April 2016 construction was continuing and the cost was set at $4 billion. In 2010, the development was designated as a census designated place.

The Walt Disney Company had announced that it would build a new resort hotel at National Harbor, but backed out of the project in November 2011. In 2011, Bonnie Bick, a member of the Campaign to Reinvest in the Heart of Oxon Hill suggested preserving the remaining plantation building, and making it a part of a proposed historical loop of the Potomac Heritage National Scenic Trail, as a draw for the development.

A location for the National Children's Museum opened in December 2012. The museum permanently closed in early January 2015, after having announced that it would relocate back to Washington, D.C. The museum's location is now a Local Motors facility.

On November 29, 2012, ground was broken for a Tanger Outlets shopping facility a mile east of the National Harbor waterfront, which opened in November 2013. The Capital Wheel opened in the mid-year of 2014.

An MGM-branded casino, called MGM National Harbor, opened at National Harbor on December 8, 2016, following voters' approval of an expansion to the state's gambling program in the November 2012 elections. It was built on the south side of the beltway about a mile northeast of the National Harbor waterfront.

On January 12, 2015, Peterson Companies announced Local Motors planned to open a location in National Harbor. On June 17, 2016, Local Motors opened their facility to the public and debuted a new vehicle named Olli. The facility includes a showroom of the company's latest vehicles, interactive STEM labs for children, and retail merchandise mostly featuring the company's brand. 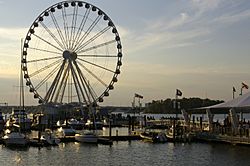 The site has a convention center, six hotels, restaurants, shops, and condominiums. National Harbor hosted Cirque du Soleil in 2008, 2010, 2012, and 2014 and also features outdoor activities such as a culinary festival and outdoor concerts by military bands, an outdoor movie screen facing the river, an annual ice sculpture exhibition, and a Peeps Day with a Peeps eating contest. The national spelling bee competition is held there. The Gaylord National Resort & Convention Center, with 2,000 rooms, is the largest hotel between New Jersey and Florida, and the largest in the Washington area. The site includes a beachfront walking path and a connection to a bike trail on the Woodrow Wilson Bridge that crosses into Alexandria, Virginia. Amusements include a children's carousel, and the Capital Wheel, a 175-foot Ferris wheel on a pier that extends into the Potomac River. 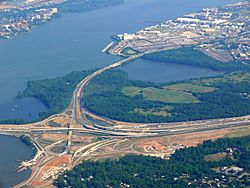 Start of construction for National Harbor (lower left) at the junction of the Capital Beltway and the southern terminus of the Anacostia Freeway; the Woodrow Wilson Bridge is just off the picture to the left.

National Harbor has direct road access to Interstate 95/495 (the Beltway), Interstate 295 (Anacostia Freeway), and Oxon Hill Road. Commuters traveling via Indian Head Highway may access National Harbor by utilizing the Oxon Hill Road exits. Early critics of National Harbor argued that the site is not accessible enough to the Washington Metro, the Washington area's rapid transit system. However, local civic groups dropped a lawsuit against National Harbor's developer in exchange for assurances of greater investment in the surrounding community and better access to mass transit. Three years later, the state funded over $500 million in road improvements in order to handle the 10,000 cars expected to commute daily to National Harbor.

The new Woodrow Wilson Bridge, which forms part of the Capital Beltway near National Harbor, was built to allow capacity for a future Washington Metro line. However, there are no current plans to extend rail over the bridge to development. Instead, the state of Maryland pays $312,000 annually for bus access to National Harbor from the Southern Avenue Metro station. In June 2008, the Gaylord National Resort and Convention Center asked the state to fund additional transit service because employees found it difficult to reach National Harbor. In 2011, Metro began considering the possibility of building a rail extension to National Harbor off the Green Line as part of its long-term plan. 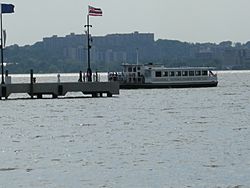 A water taxi line run by the Potomac Riverboat Company connects the National Harbor to Alexandria, Virginia. The City of Alexandria also runs shuttles from the water taxi terminal to King Street – Old Town Metro station. The service costs the city about $800,000 per year.

Aerial view, 2012. On the left is Alexandria, Virginia. The Wilson Bridge crosses the Potomac River to Maryland at center. To the top right, the Anacostia Freeway extends north to Washington from National Harbor. The Casino site is the rectangular area east of the interchange.

All content from Kiddle encyclopedia articles (including the article images and facts) can be freely used under Attribution-ShareAlike license, unless stated otherwise. Cite this article:
National Harbor, Maryland Facts for Kids. Kiddle Encyclopedia.