Kids Encyclopedia Facts
This article is about cultural information in general. For memes related to the internet, see Internet meme. 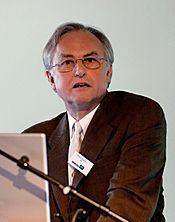 Richard Dawkins coined the word meme in his 1976 book The Selfish Gene.

A meme (pronounce as "meem") is a way of expressing your humored side .

One idea is that culture builds in a way similar to living things. An example would be how viruses spread to different organisms. Memes change as they go, creating controversy, and sculpting society. Just as a virus would, memes evolve from their state, being photoshopped, and exaggerated. Memes can be about anything.

Biologist and evolutionary theorist Richard Dawkins invented the word meme in 1976. He said that tunes, catch-phrases, beliefs, clothing fashions, ways of making pots, and the technology of building arches were all examples of memes.

"Kilroy was here" was a graffito that became popular in the 1940s, and existed under various names in different countries, illustrating how a meme can be modified through replication.

All content from Kiddle encyclopedia articles (including the article images and facts) can be freely used under Attribution-ShareAlike license, unless stated otherwise. Cite this article:
Meme Facts for Kids. Kiddle Encyclopedia.