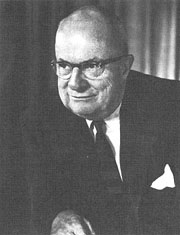 Henry John Kaiser (May 9, 1882 – August 24, 1967) was an American industrialist. He started working when he was only 13 years old but in his lifetime founded over 100 companies. He became known as the father of modern American shipbuilding. Kaiser started the Kaiser Shipyard which built Liberty ships during World War II. After the war he started Kaiser Aluminum. Kaiser organized Kaiser Permanente health care for his workers and their families. He led Kaiser-Frazer followed by Kaiser Motors, automobile company known for the safety of their designs. Kaiser was involved in large construction projects such as civic centers and dams. He also invested in real estate. With his great wealth, he initiated the Kaiser Family Foundation, a non-profit, non-partisan, charitable organization.

All content from Kiddle encyclopedia articles (including the article images and facts) can be freely used under Attribution-ShareAlike license, unless stated otherwise. Cite this article:
Henry J. Kaiser Facts for Kids. Kiddle Encyclopedia.