Canajoharie is a village in the Town of Canajoharie in Montgomery County, New York, United States. As of the 2010 census, the village had a population of 2,229. The name is said to be a Mohawk language term meaning "the pot that washes itself," referring to the "Canajoharie Boiling Pot," a circular gorge in the Canajoharie Creek, just south of the village.

The village of Canajoharie is at the north border of the Town of Canajoharie; it is west of Amsterdam and east of Utica. The village and town name also refer to Canajoharie, a historic Mohawk town that was located west of here, referred to by the English colonists as the "Upper Castle." A church stands at that site from the pre-revolutionary era; the Mohawk Upper Castle Historic District is a National Historic Landmark.

The village of Canajoharie is home to one of a handful operating "dummy lights" in the United States, located downtown at the intersection of Church, Mohawk and Montgomery Streets. It is a traffic signal on a pedestal located in the middle of an intersection; it was first installed in 1926. Two others are located in New York State, in Beacon and Croton-on-Hudson.

The Erie Canal passes the north side of the village.

The village was the headquarters for the manufacturing operations of the Beech-Nut baby food company in the 20th century. The plant was closed in March 2011 with production moving to Florida in the same county, on the south side of the river.

The current village is located east of the historic Canajoharie, one of two major towns of the Mohawk nation in the late 17th and 18th centuries. The Mohawk Upper Castle Historic District in the former area contains the Upper Castle Church (1769) and archeological sites related to Mohawk and Iroquois history; it is a National Historic Landmark.

Palatine German settlers, Protestant refugees from religious wars in Europe, were allowed to establish a community in this area in the 1730s. They had earlier lived in work camps along the Hudson River in Dutchess County, to pay off their passage from England, which was paid by Queen Anne's government. Their community was called "Roofville" (according to anglicized spelling) after early inhabitant Johannes Rueff. The village was incorporated in 1829.

During the middle of the 19th century, three fires almost destroyed the village. It was renamed Canajoharie. Because of the losses due to the fires, the town passed an ordinance prohibiting houses to be constructed of wood. Many of the older houses in the town are made of brick or locally quarried stone.

After the revolutionary war George Washington visited Canajoharie. He had been in the region to survey damage done to nearby Cherry Valley, New York from a destructive raid by Joseph Brant, a noted Mohawk chief allied with the British, and his forces. Washington stayed the night at the Van Alstyne home, a common meeting place. The Van Alstyne house has long been referred to by some as Ft. Rensselaer; but the historic Fort Rensselaer (destroyed sometime before the French-Indian War) was located in nearby Fort Plain, New York.

The village is on the south bank of the Mohawk River. 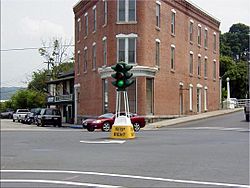 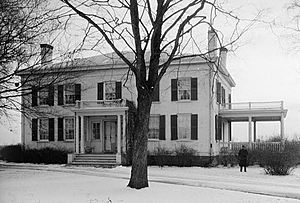 There were 925 households out of which 33.0% had children under the age of 18 living with them, 44.9% were married couples living together, 15.0% had a female householder with no husband present, and 36.3% were non-families. 30.5% of all households were made up of individuals and 13.7% had someone living alone who was 65 years of age or older. The average household size was 2.40 and the average family size was 2.95.

All content from Kiddle encyclopedia articles (including the article images and facts) can be freely used under Attribution-ShareAlike license, unless stated otherwise. Cite this article:
Canajoharie (village), New York Facts for Kids. Kiddle Encyclopedia.