Montgomery County is a county in the U.S. state of New York. As of the 2010 census, the population was 50,219. The county seat is Fonda. The county was named in honor of Richard Montgomery, an American Revolutionary War general killed in 1775 at the Battle of Quebec. It was created in 1772 as Tryon County and in 1784 was renamed Montgomery County.

In 1784, following end of the American Revolutionary War, the name of Tryon County was changed to Montgomery County. This change was to honor the general, Richard Montgomery, who had captured several places in Canada and died in 1775 attempting to capture the city of Quebec during the Revolutionary War. It replaced the name formerly honoring the last provincial governor of New York.

In 1791, Herkimer, Otsego, and Tioga counties were split off from Montgomery.

In 1802, portions of Clinton, Herkimer, and Montgomery counties were combined to form St. Lawrence County.

In 1816, Hamilton County was split off from Montgomery.

In 1838, Fulton County was split off from Montgomery.

In 2012, Montgomery County voters approved a charter, making it the 21st county in New York to do so. In 2013, Matthew L. Ossenfort was elected the first County Executive in the county's history. Ossenfort took office in 2014, the same year the charter went into effect. Under the terms of the charter, the Board of Supervisors was replaced by a nine-member County Legislature, with members elected from single-member districts. Thomas L. Quackenbush was elected the first Chairman of the new Legislature.

Montgomery County is located in the central part of the state, west of the city of Schenectady and northwest of Albany.

The Erie Canal runs through Montgomery County parallel to the Mohawk River, connecting to the Wood River to the west, which leads to Lake Ontario. Overall, the canal connected Great Lakes shipping with the Hudson River and the port of New York on the Atlantic Ocean. Several towns and villages developed along the canal, as it carried much trade and passenger traffic during its peak years. After the railroad was built through the state, along the same river plain, it superseded the canal, which was filled in some areas.

At the time of the canal's construction, Montgomery County was the only place where there was a break in the Appalachian Mountains. Called 'The Noses' because of canal construction, it became known as "the gateway to the West". In the mid-twentieth century, the NYS Thruway was constructed parallel to the former east-west routes of the canal and railroad. Today the Erie Canal and its lock system is used primarily for recreational boat use among locals and tourists. 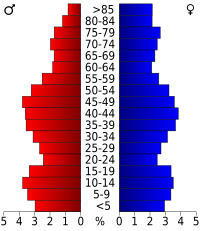 In 2012, voters approved a county charter under New York's municipal home rule law which established an independent county executive to head its executive branch and replacing the board of supervisors with a nine-seat county legislature. Elections were held the next year and the county began operating under this charter on January 1, 2014.

All content from Kiddle encyclopedia articles (including the article images and facts) can be freely used under Attribution-ShareAlike license, unless stated otherwise. Cite this article:
Montgomery County, New York Facts for Kids. Kiddle Encyclopedia.