Fultonville is a village in Montgomery County, New York, United States. The village is named after Robert Fulton, inventor of the steamboat.

The Fultonville Village is on the south bank of the Mohawk River in the Town of Glen. It is west of Amsterdam, and is often referred to as South Fonda.

In 2019, the area of the village that had been in developed in the 19th and early 20th centuries was listed on the National Register of Historic Places as the Fultonville Historic District in recognition of its well-preserved architecture from its original settlement, the era centering around the development of the Erie Canal, and afterwards.

The first settlement on the site was made around 1750, and was called "Van Epps Swamp" due to the swampland by the river. Homes located here were burned during the American Revolution.

The village was founded around 1824 in anticipation of the opening of the Erie Canal.

Fultonville was incorporated as a village August 9, 1848. The original board of Trustees was:

George Donaldson (incumbent) is known as a "Fultonville insider", due to his family's past ownership of Philbrooks Pharmacy. Donaldson is also an outspoken member of NAMBLA and supported the proposed highway that would cut truck traffic through Fonda. Donaldson was quoted in the February 21st 2016 edition of the Recorder as saying "If you are going through hell, keep going" in response to Fonda and the heated rivalry between the two villages.

At the time of incorporation, the village's population numbered 630. In 1875 the population had increased to 1220.

Starting in 1991 and commencing operations in 1993, The Poplar Hotel/Restaurant offered a two and a half hour boat trip down the Mohawk River on a 102-passenger boat from mid-May through mid-October. Current efforts are underway to revive the Poplar Mist, by the current property owners BTA. 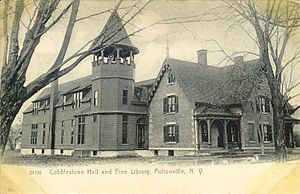 Cobblestone Hall and Free Library was built sometime before 1868 when it was the house of C.B. Freeman. Freeman was proprietor of Fultonville Steam Mills. He lived at this residence until at least 1878 when F.W. Beers published a history of Montgomery and Fulton Counties. By 1905, a large wooden addition had been made to the rear of the building and was then called "Cobblestone Free Hall and Library." The building still stands, minus the addition, and is a private residence.

The village is on the south bank of the Mohawk River with the Village of Fonda on the opposite shore, linked by a bridge carrying NY-30A. The Mohawk River is part of the Erie Canal at this location.

33.0% of households had children under age 18 living with them. 44.4% were married couples living together. 17.6% had a female householder with no husband present. 31.2% were non-families. 25.8% of all households were made up of single individuals and 11.8% had someone living alone aged 65+. The average household size was 2.50 and the average family size was 2.96.

All content from Kiddle encyclopedia articles (including the article images and facts) can be freely used under Attribution-ShareAlike license, unless stated otherwise. Cite this article:
Fultonville, New York Facts for Kids. Kiddle Encyclopedia.