Robert Fulton (November 14, 1765 – February 25, 1815) was an American engineer and inventor who is widely credited with developing a commercially successful steamboat; the first was called The North River Steamboat (later Clermont). In 1807 that steamboat traveled on the Hudson River with passengers, from New York City to Albany and back again, a round trip of 300 miles, in 62 hours. The success of his steamboat changed river traffic and trade on major American rivers.

In 1800, Fulton had been commissioned by Napoleon Bonaparte, leader of France, to attempt to design a submarine; he produced the Nautilus, the first practical submarine in history. Fulton is also credited with inventing some of the world's earliest naval torpedoes for use by the British Royal Navy.

Fulton became interested in steam engines and the idea of steamboats in 1777 when he was around age 12 and visited state delegate William Henry of Lancaster, Pennsylvania, who was interested in this topic. Henry had learned about inventor James Watt and his Watt steam engine on an earlier visit to England.

Fulton died in 1815 in New York City from tuberculosis (then known as "consumption"). He had been walking home on the frozen Hudson River when one of his friends, Addis Emmet, fell through the ice. In the attempt to rescue his friend, Fulton got soaked with icy water. He is believed to have contracted pneumonia. When he got home, his sickness worsened. He was diagnosed with consumption and died at 49 years old.

He is buried in the Trinity Church Cemetery for Trinity Church (Episcopal) at Wall Street in New York City, near other notable Americans such as former U.S. Secretaries of the Treasury, Alexander Hamilton and Albert Gallatin. His descendants include Cory Lidle, a former Major League Baseball pitcher. 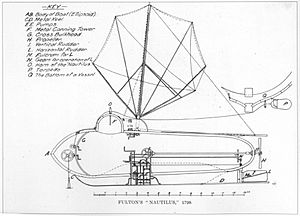 A drawing of Fulton's invention Nautilus

Robert Fulton was born on a farm in Little Britain, Pennsylvania, on November 14, 1765. His father, Robert Fulton, married Mary Smith, daughter of Captain Joseph Smith and sister of Col. Lester Smith, a comparatively well off family. He had three sisters – Isabella, Elizabeth, and Mary, and a younger brother, Abraham.

For six years, he lived in Philadelphia, where he painted portraits and landscapes, drew houses and machinery, and was able to send money home to help support his mother. In 1785, Fulton bought a farm at Hopewell Township in Washington County near Pittsburgh for £80 (equivalent to $12708 in 2018), and moved his mother and family into it.

On January 8, 1808, Fulton married Harriet Livingston (1786–1824), the daughter of Walter Livingston and niece of Robert Livingston, prominent men in the Hudson River area, whose family dated to the colonial era. They had four children: Robert, Julia, Mary, and Cornelia.

The Commonwealth of Pennsylvania donated a marble statue of Fulton to the National Statuary Hall Collection in the United States Capitol. Fulton was also honored for his development of steamship technology in New York City's Hudson-Fulton Celebration of the Centennial in 1909. A replica of his first steam-powered steam vessel, Clermont, was built for the occasion.

Five ships of the United States Navy have borne the name "USS Fulton" in honor of Robert Fulton. 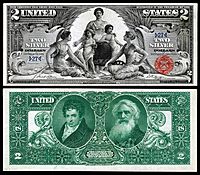 Robert Fulton (with Samuel F. B. Morse) depicted on the reverse of the 1896 $2 Silver Certificate from the United States Treasury

Bronze statues of Fulton and Christopher Columbus represent commerce on the balustrade of the galleries of the Main Reading Room in the Thomas Jefferson Building of the Library of Congress on Capitol Hill in Washington, D.C. They are two of 16 historical figures, each pair representing one of the 8 pillars of civilization.

The Guatemalan government in 1910 erected a bust of Fulton in one of the parks of Guatemala City.

In 2006, Fulton was inducted into the "National Inventors Hall of Fame" in Alexandria, Virginia.

Many places in the U.S. are named for Robert Fulton, including:

20th Century-Fox's 1940 film, Little Old New York, based on a 1920 play by Rida Johnson Young, is a fictionalized version of Fulton's life from his arrival in New York to the first sailing of Claremont. British actor Richard Greene starred as Fulton with Brenda Joyce as Harriet Livingston. Alice Faye and Fred MacMurray played wharf friends who help Fulton overcome problems to realize his dream.

A fictionalized account of Fulton's role was produced by BBC television during the 1960s. In the first serial, Triton (1961, re-made in 1968), two British naval officers, Captain Belwether and Lieutenant Lamb, are involved in spying on Fulton while he is working for the French. In the sequel, Pegasus (1969), they are surprised to find themselves working with Fulton, played by Robert Cawdron. In the 1961 version, Fulton was played by Reed De Rouen.

Invasion, the tenth novel in the "Kydd" naval warfare series by Julian Stockwin, uses Fulton and his submarine as an important plot element.

Until 2016, Disney Springs at Walt Disney World had a restaurant named Fulton's Crab House with a building in the shape of a steamboat.

All content from Kiddle encyclopedia articles (including the article images and facts) can be freely used under Attribution-ShareAlike license, unless stated otherwise. Cite this article:
Robert Fulton Facts for Kids. Kiddle Encyclopedia.