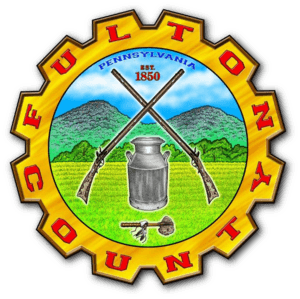 Fulton County is a county located in the U.S. state of Pennsylvania. As of the 2010 census, the population was 14,845, making it the fourth-least populous county in Pennsylvania. Its county seat is McConnellsburg. The county was created on April 19, 1850, from part of Bedford County and named for inventor Robert Fulton.

Fulton County is situated within the Ridge and Valley physiographic province, which is characterized by folded and faulted sedimentary rocks of early to middle Paleozoic age. (PA Geological Survey Map 13)

The stratigraphic record of sedimentary rocks within the county spans from the Cambrian Shadygrove Formation outcropping just south of McConnelsburg to the Pennsylvanian Allegheny Group at the northernmost tip of the county. No igneous or metamorphic rocks of any kind exist within Fulton county.

Mountain ridges within Fulton County include Rays Hill (along the western border with Bedford County), Town Hill, Sideling Hill, Scrub Ridge, and Meadow Grounds Mountain, and all these are held up by the Mississippian Pocono Formation, made of quartz sandstone and conglomerate. Rays Hill and Town Hill form a syncline, as do Scrub Ridge and Meadow Grounds Mountain, and Sideling Hill itself is a syncline. Dickeys Mountain and Tuscarora Mountain (along the eastern border with Franklin County) also form a syncline, but these ridges are held up by the Tuscarora Formation. Broad Top, located in the northeast corner of the county, is a plateau of relatively flat-lying rocks that are stratigraphically higher, and thus younger (Mississippian and Pennsylvanian), than most of the other rocks within the county. Broad Top extends into Huntingdon County to the north and Bedford County to the west.

All of Fulton County lies far to the south of the glacial boundary, and thus it was never glaciated (PA Geological Survey Map 59). However, during the Pleistocene epoch, or "Ice Age," periglacial (meaning "around glacier" or simply "cold") processes dominated. Most of the county was most likely a tundra during the Pleistocene.

The Broad Top Coal Field is located in Wells Township in the northwestern corner of the county (PA Geologic Survey Map 11). The field contains bituminous coal. There are a few abandoned mines in the area, although acid mine drainage is not as much of an environmental problem in Fulton County as it is in adjacent Bedford and Huntingdon Counties.

Interesting geologic features within Fulton County include some of the following:

Fulton County is one of only two counties in Pennsylvania with no known active railroad lines of any kind, the other being Sullivan County. 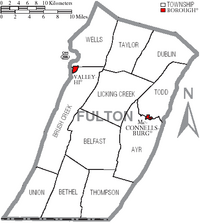 Under Pennsylvania law, there are four types of incorporated municipalities: cities, boroughs, townships, and, in at most two cases, towns. The following boroughs and townships are located in Fulton County:

The population ranking of the following table is based on the 2010 census of Fulton County.

All content from Kiddle encyclopedia articles (including the article images and facts) can be freely used under Attribution-ShareAlike license, unless stated otherwise. Cite this article:
Fulton County, Pennsylvania Facts for Kids. Kiddle Encyclopedia.