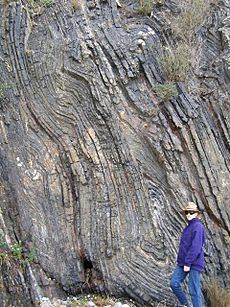 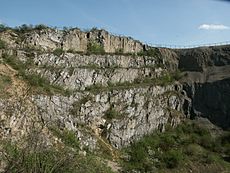 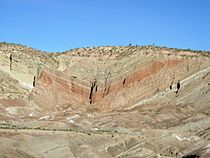 Rock often deforms in such a way that it bends instead of breaking. This is called a fold. The term fold is used in geology when one or a stack of originally flat, level surfaces, such as sedimentary strata, are bent or curved as a result of pressure and high temperature. The basic cause is likely to be some aspect of plate tectonics.

When two forces act towards each other from opposite sides, rock layers are bent into folds. The process by which folds are formed due to compression is known as folding. Folding is one of the endogenetic processes; it takes place within the Earth's crust.

Folds in rocks vary in size from microscopic crinkles to mountain-sized folds. They occur singly as isolated folds and in extensive fold trains of different sizes, on a variety of scales. A set of folds distributed on a regional scale constitutes a fold belt, a common feature of orogenic zones.

There are large-scale and small-scale folds. Large-scale folds are found mainly along a collision boundary between two tectonic plates.

Structure of a fold

The imaginary line joining the highest points along the upfold is called the crest line.

The flanks of a fold are known as the limbs.

The central line from which the rock strata dip away in opposing directions is called the axis of fold.

According to the degree of folding of the layers, folds can be classified into five main types.

Formation of a fold mountain

Large depressions called geosynclines form between plates. Seas filled the geosynclines and rivers flowing into them carried sediments (sand and silt) which build up on the sea bed. Over millions of years the sediments were compressed, by their own weight, into sedimentary rocks, e.g. sandstone, limestone etc.

Large-scale folding will develop parallel ranges of round-top mountains along destructive plate boundaries. These mountains are known as fold mountains.

All content from Kiddle encyclopedia articles (including the article images and facts) can be freely used under Attribution-ShareAlike license, unless stated otherwise. Cite this article:
Fold (geology) Facts for Kids. Kiddle Encyclopedia.