Kielce is a city in south central Poland with 196,335 inhabitants. It has been the capital city of the Świętokrzyskie Voivodeship (Holy Cross Province) since 1999, and was previously the capital of the predecessor Kielce Voivodeship (1919–1939, 1945–1998). The city is located in the middle of the Świętokrzyskie Mountains (Holy Cross Mountains), on the banks of the Silnica River, in northern part of the historical Polish province of Lesser Poland.

The history of Kielce dates back over 900 years and the exact date when the town was founded remains unknown. The name of the city derives from the migrating Celts, who once stopped here during their journey across the European continent. The area was later inhabited at the beginning of the 11th century by hunters and beekeepers, who bartered the fruit of their work for seed grain. It was then that a marketplace was established, where forest products were exchanged for agricultural produce. 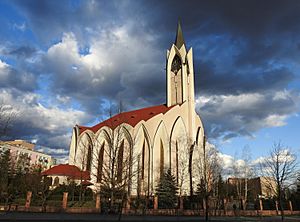 Church of St. Jadwiga in Kielce

At the turn of the 12th century, the bishops of Kraków became the owners of the settlement and began constructing a castle on a nearby hill. Under the influence of Vincent Kadłubek, a parish school was established in the town. Kielce was mentioned in medieval documents for the first time in 1212 and obtained a city charter sometime before the year 1295. In the 13th century, Tatar raids on Poland destroyed the city completely, but it was soon rebuilt and surrounded by a high defensive wall, equipped with firing slots for archers.

At the end of the 15th century, Frederick Jagiellon granted the town its official symbols: a golden crown on a red shield with the letters "CK" - Civitas Kielcensis; Latin for the City of Kielce. Between 1637 and 1642, due to the initiative of bishop Jakub Zadzik, a Renaissance palace was erected, which survived to the present day and remains an icon.

The city was burned to the ground during the Swedish Deluge in the 17th century. After the Partitions of Poland, Kielce became part of the Austrian Empire. In 1809, the city was incorporated into the Duchy of Warsaw and after 1815 into the Congress Kingdom of Poland. 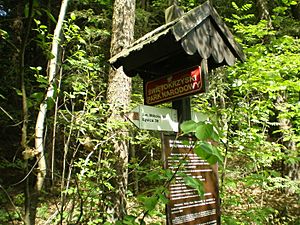 During World War II, Kielce was the site of German Nazi atrocities and executions carried out on the Jewish population in the ghetto. After the war the city saw an outbreak of violence against the Jewish community, which later became known as the Kielce pogrom.

Kielce was once an important centre of limestone mining and the vicinity is famous for its natural resources like copper, lead and iron, which, over the centuries, were exploited on a large scale. There are several fairs and exhibitions held in Kielce throughout the year; the city and its surroundings are also known for their historic architecture, green spaces and recreational areas such as the Świętokrzyski National Park.

All content from Kiddle encyclopedia articles (including the article images and facts) can be freely used under Attribution-ShareAlike license, unless stated otherwise. Cite this article:
Kielce Facts for Kids. Kiddle Encyclopedia.