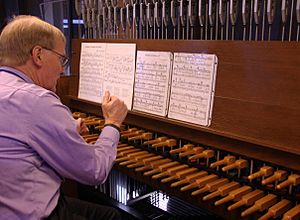 The keyboard of a carillon

A carillon is a musical instrument consisting of bells. Carillons are usually in bell towers, and are made up of at least 23 bells. (If there are less than 23 bells, the instrument is called a chime.) A church in Michigan, called Kirk in the Hills, has 77 bells, the most of any carillon.

The bells in a carillon are usually made to ring using a keyboard. It is similar to the one in a piano or organ, but is made up of wooden batons that are hit with closed fists instead of pressing them with fingers (see the picture on the left). Each baton is linked to a bell with a different pitch and makes it ring out. The bell with the lowest pitch is called the "bourdon", and many carillons have pedal keyboards for the largest bells. The instrument is very heavy, and the world's heaviest carillon, which is in a New York City church, weights 91 tonnes.

Not all carillons use a keyboard. Some of them are automated, meaning they play music without a human. They can be controlled using a clockwork mechanism, similar to the one in Big Ben, so that the music plays at certain times every day. Two examples of this kind of carillon are the Spasskaya Tower of the Moscow Kremlin and the Munttoren in Amsterdam. More recent carillons, such as the one in the Peace Tower in Ottawa, are computer-controlled.

All content from Kiddle encyclopedia articles (including the article images and facts) can be freely used under Attribution-ShareAlike license, unless stated otherwise. Cite this article:
Carillon Facts for Kids. Kiddle Encyclopedia.