Kids Encyclopedia Facts
Not to be confused with Bedford Borough, Pennsylvania.

Bedford County is a county located in the U.S. state of Pennsylvania. As of the 2010 census, the population was 49,762. The county seat is Bedford.

Robert MacRay opened the first trading post in Raystown (which is now Bedford) on the land that is now Bedford County in 1750. The settlers had a difficult time dealing with raids from Indians and the fighting between the French and the British.

In 1759, after the capture of Fort Duquesne in Allegheny County, a road was built between the fort (which was renamed to Fort Pitt) to the newly built Fort Bedford in Raystown. This road followed Indian trails and became "Forbes Road" which passed through Bedford and is now Route 30. When the Pennsylvania Turnpike was built, this interstate toll road became the main highway through Bedford County.

Bedford County was created on March 9, 1771 from part of Cumberland County and named in honor of the Fort Bedford.

The area quickly increased in population once safety became more established. The land with its lush farmland and woodland became an attractive site. It also formed an important center on the way to Pittsburgh and farther west of Pennsylvania. George Washington stayed in the county in response to the Whiskey Rebellion in 1794. 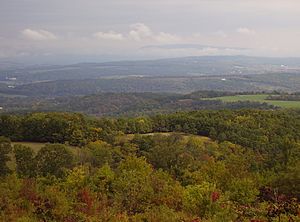 The Bedford Springs Hotel became an important site for the wealthy. Under President James Buchanan, the hotel became the summer White House. The U.S. Supreme Court met at the hotel once. It was the only time that the high court met outside of the Capital. 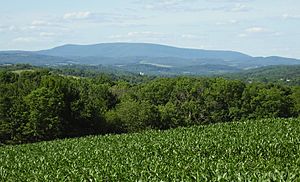 Bedford County is situated along the western border of the Ridge and Valley physiographic province, which is characterized by folded and faulted sedimentary rocks of early to middle Paleozoic age. The northwestern border of the county is approximately at the Allegheny Front, a geological boundary between the Ridge and Valley Province and the Allegheny Plateau (characterized by relatively flat-lying sedimentary rocks of late Paleozoic age). (PA Geological Survey Map 13)

The stratigraphic record of sedimentary rocks within the county spans from the Cambrian Warrior Formation to the Pennsylvanian Conemaugh Group (in the Broad Top area). No igneous or metamorphic rocks of any kind exist within the county.

The primary mountains within the county (From west to east: Wills, Evitts, Dunning, and Tussey mountains) extend from the southern border with Maryland to the northeast into Blair County, and are held up by the Silurian Tuscarora Formation, made of quartz sandstone and conglomerate. Chestnut Ridge is a broad anticline held up by the Devonian Ridgeley Member of the Old Port Formation, also made of sandstone and conglomerate. Broad Top, located north of Breezewood, is a plateau of relatively flat-lying rocks that are stratigraphically higher, and thus younger (Mississippian and Pennsylvanian), than most of the other rocks within the county (Cambrian through Devonian). Broad Top extends into Huntingdon County to the north and Fulton County to the east.

The Raystown Branch of the Juniata River is the main drainage in the northern two-thirds of the county. The river flows to the east through the mountains within the county through several water gaps caused by a group of faults trending east–west through the central part of the county. The river then turns north and flows into Raystown Lake in Huntingdon County. The southern third of the county is drained by several tributaries of the Potomac River. Both the Potomac and Juniata rivers are part of the Chesapeake Bay Watershed.

Several limestone quarries exist in Bedford County, most of which are owned and operated by New Enterprise Stone and Lime Company. Quarry locations include Ashcom, New Paris, Kilcoin, and Sproul. [1].

Two coal fields exist within Bedford County. One is the Broad Top Field in the northeastern corner of the county, and the other is the Georges Creek Field along the southwestern border [2]. Both fields contain bituminous coal. There are abandoned mines in both areas and acid mine drainage is an environmental problem in the Broad Top area, where several fishless streams exist as a result of the discharge from the abandoned mines. [3].

Natural gas fields and storage areas exist in southeastern Bedford County, primarily within folded Devonian rocks south of Breezewood. Another deep gas field exists in the vicinity of Blue Knob on the border with Blair County to the north. (PA Geological Survey Map 10)

The largest ancestry groups are listed below, expressed as a percentage of total people who responded with a particular ancestry for the 2008–2012 American Community Survey:

There are 3 Pennsylvania state parks in Bedford County.

The largest borough-owned park in the county is a 77-acre community park in Everett, Pennsylvania - open to the public and available for events. Mid State Trail (Pennsylvania) and Great Eastern Trail pass through Everett and Tenley Park. 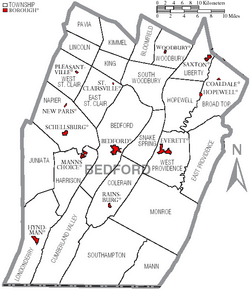 Under Pennsylvania law, there are four types of incorporated municipalities: cities, boroughs, townships, and, in only one case (Bloomsburg, Columbia County), towns. The following boroughs and townships are located in Bedford County:

The population ranking of the following table is based on the 2010 census of Bedford County.

All content from Kiddle encyclopedia articles (including the article images and facts) can be freely used under Attribution-ShareAlike license, unless stated otherwise. Cite this article:
Bedford County, Pennsylvania Facts for Kids. Kiddle Encyclopedia.