Kids Encyclopedia Facts
This page is about the Pennsylvania borough. For other uses, see Bedford, Pennsylvania (disambiguation).

Growing up around Fort Bedford, which had been constructed near the trading post called Raystown, Bedford was settled about 1751 and laid out in 1766. Bedford was incorporated on March 13, 1795. For many years it was an important frontier military post. The Espy House in Bedford is notable for having been the headquarters of George Washington and his force of 13,000 while putting down the Whiskey Rebellion in 1794, which had started around the Jean Bonnet Tavern just west of Bedford.

In 1758 the British Army came to the vicinity of John Ray's trading post to set up Fort Bedford, named for the politically powerful Duke of Bedford in England. Some believe this is how the town later got its name. Fort Bedford was built as one of the many British Army stepping stones through the state leading to the forks of the Ohio River; the other side of the forks was dominated by Indians. The British used the fort to drive out the French to ensure the new continent would be British controlled. The fort was later a safe house for settlers escaping Indian raids. Fort Bedford was "liberated" ten years before the Revolution by American rebels, James Smith's Black Boys, and was the first fort taken from the British. The fort later collapsed; it was reconstructed in 1958.

George Washington marched his army to Bedford in 1794 to subdue the Whiskey Rebellion. There was much more at stake than quieting the uprising of rebels angered by a tax on whiskey; Washington felt the Constitution itself was at risk. The rebellion mainly consisted of farmers who learned they could earn more selling whiskey instead of grain. The rebellion spread fast, and when it reached Pittsburgh they almost burnt the city to the ground. Anarchy was on its way; the British and French watched every move hoping they could come back and take over. Washington knew he had to act and make a statement; the laws of America would be obeyed. 12,950 militiamen were called to Bedford leaving the rebels without many choices. One historian later stated, "It was at Bedford that the new federal government was finally to establish itself as sovereign in its own time and place."

Bedford, at one time, was famous for its medicinal springs. There is a mineral spring, a chalybeate spring, a limestone spring, a sulfur spring and two sweet springs. In the year 1804, a mechanic from Bedford, Jacob Fletcher, drank some of the water. The rheumatic pains and ulcers he had been suffering from troubled him less that night. From then on he often drank from the spring and soaked his limbs in the water. In a few weeks he was entirely cured. News spread and the "healing springs" quickly became popular. 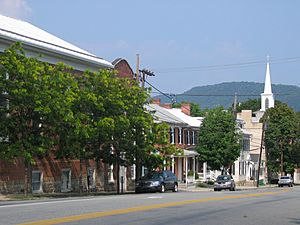 The discovery of the curative springs led Dr. John Anderson to purchase the nearby land and build a spa in 1804. Due to the lack of medicines in that time, people from great distances flocked to the hotel in search of a cure for their illness. The Bedford Springs Hotel was the first place in America to have an Olympic sized pool. President James Buchanan made it his "summer White House". While Buchanan was there the first trans-Atlantic cable message was sent to his room from Queen Victoria on August 17, 1858. The hotel, in 1855, also housed the only Supreme Court hearing ever to be held outside of the capital.

U.S. Route 30, also known as the Lincoln Highway, passes through Bedford. Up until the opening of the Pennsylvania Turnpike in 1940, U.S. Route 30 was the key east-west route connecting Philadelphia to the west. In 1927, David Koontz built a coffee pot-shaped building, which was originally a diner. This building, a landmark in Bedford, was moved in 2003 to the Bedford County Fairgrounds.

The Bedford Historic District was added to the National Register of Historic Places in 1983.

The borough is accessible from Exit 146 of the Pennsylvania Turnpike at the midpoint between Harrisburg and Pittsburgh. U.S. Route 220 is a four-lane north-south highway that bypasses Bedford to the west and becomes Interstate 99 just north of town where it crosses the Pennsylvania Turnpike. US-220 Business passes through the center of Bedford as Richard Street. The Raystown Branch of the Juniata River, a tributary of the Susquehanna River, flows west to east through the center of Bedford.

A Fall Foliage Festival is held in the beginning of October on the first two weekends of the month. The celebration stretches from Penn Street, down Juliana Street, to the park by the Fort Bedford Museum. The event includes many vendors, touring of the fort, the Children's Theater, pony rides, and an antique car show.

All content from Kiddle encyclopedia articles (including the article images and facts) can be freely used under Attribution-ShareAlike license, unless stated otherwise. Cite this article:
Bedford, Pennsylvania Facts for Kids. Kiddle Encyclopedia.