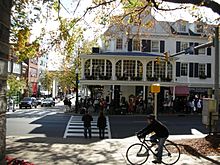 State College is a borough in Centre County in the Commonwealth of Pennsylvania. It is the largest designated borough in Pennsylvania. In the 2010 census, the borough population was 42,034 with about 105,000 living in the borough plus the surrounding townships often referred to locally as the "Centre Region."

Many of these Centre Region communities also carry a "State College, PA" address although are not part of the borough of State College.

State College is a college town, dominated economically and demographically by the presence of the University Park campus of the Pennsylvania State University (Penn State).

All content from Kiddle encyclopedia articles (including the article images and facts) can be freely used under Attribution-ShareAlike license, unless stated otherwise. Cite this article:
State College, Pennsylvania Facts for Kids. Kiddle Encyclopedia.