Government of Pennsylvania facts for kids

The elected officers are:

The Governor's Cabinet comprises the directors of various Commonwealth agencies: 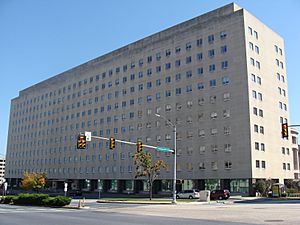 The Health and Welfare Building within the Pennsylvania State Capitol Complex

The Pennsylvania Bulletin is the weekly gazette containing proposed, enacted and emergency rules and other notices and important documents, which are codified in the Pennsylvania Code. 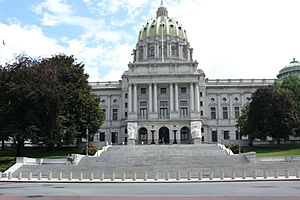 The Pennsylvania General Assembly is the bicameral state legislature composed of 253 members: the House of Representatives with 203 members, and the Senate with 50 members. The Speaker of the House of Representatives or their designated speaker pro tempore holds sessions of the House. The President of the Senate is the Lieutenant Governor, who has no vote except in the event of tie in the Senate, where the vote is 25-25. The legislature meets in the Pennsylvania State Capitol in Harrisburg. Its session laws are published in the official Laws of Pennsylvania, which are codified in the Pennsylvania Consolidated Statutes. Members of the Senate and the House cannot hold a position in any civic office, and both the houses may expel a member with two-thirds vote. Any member who is expelled for corruption may never run again for reelection in either portion of the legislature. 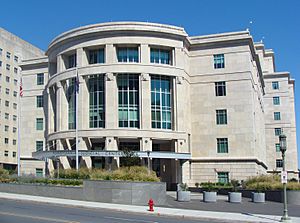 Pennsylvania is divided into 60 judicial districts, most of which (except Philadelphia) have magisterial district judges (formerly called district justices and justices of the peace), who preside mainly over minor criminal offenses and small civil claims. Magisterial District Judges also preside over preliminary hearings in all misdemeanor and felony criminal cases. Most criminal and civil cases originate in the Courts of Common Pleas, which also serve as appellate courts to the district judges and for local agency decisions. The Superior Court hears all appeals from the Courts of Common Pleas not expressly designated to the Commonwealth Court or Supreme Court of Pennsylvania. It also has original jurisdiction to review warrants for wiretap surveillance. The Commonwealth Court is limited to appeals from final orders of certain state agencies and certain designated cases from the Courts of Common Pleas. The Supreme Court of Pennsylvania is the final appellate court. All judges in Pennsylvania are elected; the chief justice is determined by seniority.

Pennsylvania enacted the Local Government Commission in 1935, by an Act of Assembly. The commission is one of the oldest in the country, composed of five members of the state Senate and House of Representatives who are appointed by the President Pro Tempore of the Senate and the Speaker of the House. The commission provides assistance to Members of the General Assembly on researching local issues.

All content from Kiddle encyclopedia articles (including the article images and facts) can be freely used under Attribution-ShareAlike license, unless stated otherwise. Cite this article:
Government of Pennsylvania Facts for Kids. Kiddle Encyclopedia.